超级马里奥银河是在Wii發行的遊戲，也是在Super Mario 64、Super Mario Sunshine和Super Mario 64 DS後馬里奧的3D平台遊戲。 It had 700,000 copies pre-ordered in Japan, and 400,000 in the U.S.

Super Mario Galaxy, unlike other Mario games, takes place in deep space. Most of the game's levels consist of many small planets and planetoids, however some are as big as real life planets. The game has 121 Stars to collect, although the player will have to go through the first 120 Stars twice (once as Mario and once as Luigi) to unlock the 121st and final Star.

Every hundred years a huge comet (Grand Star) flies by in the skies above the Mushroom Kingdom. One year, that comet filled the entire sky, and from it fell a stream of shooting stars. The Toads scooped up the Star Bits and brought them to the castle, where they were reborn as a great Power Star. That night Mario received a letter:

"Dear Mario, I'll be waiting for you at the castle on the night of the Star Festival. There's something I'd like to give you." — from Peach.

With invitation in hand, Mario headed off to the castle just as the Star Festival was getting into full swing. Surrounded by Toads gleefully trying to catch falling Star Bits, Mario was looking forward to the night's festivities.

But then something happened.

Bowser attacked the Toads with his airships and froze them in crystals. He "invited" Peach to the creation of his new galaxy and warped into space with her castle to the center of the universe. When Mario tried to save her, a Magikoopa broke the airborne path to the castle causing Mario to fall into an unknown land.

Mario later woke up on a small grassy moon and met three Star Bunnies who promised to tell Mario where he was if he caught them. When he did, they took him to meet Princess Rosalina, who told Mario that the universe was in great peril after Bowser had attacked her "ship", the Comet Observatory, and stole the Power Stars, including the seven Grand Stars. Without them, the Comet Observatory was doomed. Rosalina asked Mario to rescue the Grand Stars in order to defeat Bowser, who took Peach to the center of the universe. Mario then started his journey across the galaxies, freeing Power and Grand Stars. Once five of the Grand Stars were collected, the Comet Observatory became a starship and was able to take Mario to the center of the universe.

There he defeated Bowser in his brand-new galaxy, retrieved the last Grand Star, and rescued Princess Peach. Without this Grand Star, the sun of Bowser's near-complete galaxy went supernova and became a gigantic black hole. Everything in the universe began to fall into the black hole. The Lumas from the Comet Observatory, including the Luma who had faithfully accompanied Mario, sacrificed themselves in order to neutralize it. The Lumas attacked the black hole's singularity, and it soon disintegrated in a massive explosion. Mario appeared in front of Rosalina, who had somehow managed to save him from the cataclysm. She told him that "this was not the end, but a new beginning for the universe," and that "the universe was an endless cycle, but one that never repeats itself exactly the same way each time."

Mario later awoke in the Mushroom Kingdom near Peach's castle. He saw everyone he'd met throughout his adventure celebrating, while Bowser and Peach sat next to him. When he looked into the sky, he noticed a green light of a new galaxy. "Welcome! Welcome, new galaxy!" Mario exclaimed, as the camera zoomed out into space, revealing that the whole universe had been merged into one giant galaxy (although the galaxy Mario saw in the sky is not shown). If the player continues with the file, Rosalina will say if all 120 Power Stars are collected, the player can travel the new world. If the player has finished the game with 120 stars, after the credits Rosalina and a group of Lumas appear on the planet Mario started on at the beginning of the game. Rosalina says "I will watch over you from beyond the stars," and flies off to the Comet Observatory. Then the white baby Luma is shown to be alive, now residing on the small planet. Finally, if the player has just beaten the game with 120 Stars with Mario, a Luigi tab will appear with him saying "Super Luigi Galaxy!".

The Luigi Story goes exactly the same as Mario's. Even the Luigi in Mario's story is still Luigi. When the player has defeated Bowser and continues with the Luigi Story, Rosalina will again say if Luigi collects all 120 stars, the player can travel to a new world. When the player collects 120 Stars, the player can travel to Grand Finale Galaxy, the new world and the same new galaxy Mario saw in the ending movie. This galaxy is parallel to the Mushroom World. This explains why there are two Luigis. The 121st, and final star can be found here.

In Super Mario Galaxy, also in its sequel Super Mario Galaxy 2, Luigi is a playable character (see Luigi Story above). Comparing Luigi with Mario and his "twin", Luigi runs faster and jumps higher than Mario does. But a disadvantage about him is that he has lower traction than Mario. He is also taller than Mario, but shorter than the Non-Playable Luigi.

The game featured its very own Trading Card game. It was an expression of a celebration for the game's release. The card game features 5 types of cards: Regulars, Trivias, Foils, Standees and FunTats.

A few misprints were made in the cards, that includes: 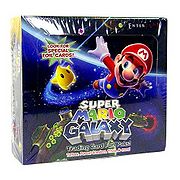 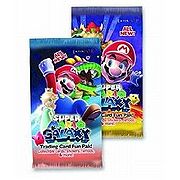