View source
watch 02:53
GTA: The Criminal Enterprises - The Loop
Do you like this video?
Play Sound

Queen B. or King Zing

Zingers are bee-like enemies containing spikes and appear in the Donkey Kong series.

Zingers first appear in Donkey Kong Country as commonly found enemies first found in Ropey Rampage. They are one of the most common enemies found in the game along with Gnawties, Neckies and Slippas. These enemies have spikes on their back to prevent the monkeys from injuring them front, back and top. They rather must use Rambi or any type of Barrel to take them out. In this game, they come in multiple kinds of colors. Zingers may fly around in various types of patterns or remain stationary. They also have a leader (Queen B.) in the game.

In the Game Boy Advance version of Donkey Kong Country, Zingers appear in the credits, but strangely have odd colorations of themselves not existing in-game. They also lack their red colorations in the game.

Zingers reappear in Donkey Kong Land acting the same as in Donkey Kong Country and have the same ways of being defeated and still have their attacks. They only don't have Queen B as their leader in this game.

Zingers reappear in Donkey Kong Country 2: Diddy's Kong Quest and Donkey Kong Land 2 remaining the same attacks and ways of being defeated. They now have a new leader (King Zing) and can now be defeated with more Animal Buddies including Rattly which can use its jumping ability, Squitter which can use its web projectiles and Squawks which can spew its eggs at them. Their main location is at Krazy Kremland.

In the game, they also have a red coloration which are invincible to everything except for TNT Barrels. Besides that, they are the same as the regular Zingers.

Zingers reappear as enemies in Donkey Kong 64. In this game, they are more uncommon and gain a new sub-species called Mecha-Zinger which may have been inspired from Buzzes. When the player comes in contact with these foes, they swoop down and try to attack the player and are somewhat harder to avoid. The player once again becomes injured with touching these foes and can only be defeated via using weapons. Some Zingers can also drop grenades instead of swooping down to attack.

Zingers were going to appear in the cancelled Donkey Kong Racing game as Donkey and Taj were seen riding Zingers in the forest and Taj can be seen riding one at the end of the trailer when the words "LET'S RIDE" are shown.

Zingers appear as items in the 2003 build of Diddy Kong Pilot released for the ROM. They can be used as projectiles to be left behind to defend the player from Buzzes or to allow players to knock into them.

Zingers make yet another appearance in DK: King of Swing and DK: Jungle Climber. They can only be defeated via contact if Donkey is invincible. Furthermore, contact injures Donkey if not invincible.

Zingers appear yet again in Donkey Kong Barrel Blast. In this game, they act similar to how they did in Diddy Kong Pilot, slowing down players who crash into them and can be used to be put behind them as a defense.

Zingers appear as a sticker in Super Smash Bros. Brawl to allow more resistance by 5 to slashing attacks. 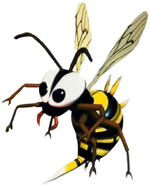 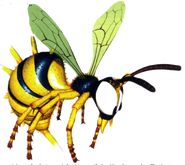 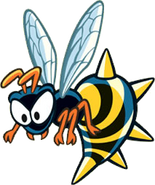 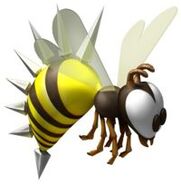