Yoshi's Island 2 is one of the first levels of Yoshi's Island from Super Mario World (along with Yoshi's Island 1). Yoshi debuts in this area. Koopa Troopas, Beach Koopas, Chargin' Chucks, Monty Moles and a lone Jumping Piranha Plant are found here as enemies.

This Dragon Coin will be in plain sight after receiving Yoshi.

This Dragon Coin is also in plain sight. It's not far after the first one.

Right past the Chargin' Chuck.

The player will need to hit a block to make a vine go up. The coin is on some cloud platforms.

Past a Monty Mole.

When starting the level, Mario must pass a couple of berries until reaching a red Koopa Shell. This shell must be thrown at a bunch of Koopas to gain points and an extra life. Next, Mario must go along until finding two yellow Question Blocks and a yellow ! Switch that can only be accessed via completion on the Yellow Switch Palace. Then, Mario must go on to find Yoshi trapped under one of the two ? Blocks with the one on the right. Then, the two must advance on. They then encounter a Message Block with a tutorial on how to spin jump which the two can either skip or read up about. The two then must get or pass the berries along with a Beach Koopa and a regular Koopa so the two can gain the first Dragon Coin surrounded by coins. Then, they must walk a few more steps until reaching a Beach Koopa about to walk into a green Koopa Shell. Yoshi can defeat this enemy and the empty shell with its stop. Then, the two must collect the second Dragon Coin located above the Beach Koopa. Then, the two are attacked by a Chargin' Chuck which tries to knock into Mario and Yoshi. They must either defeat this foe or continue and gain the third Dragon Coin the foe is guarding. Then, the two must head on until finding another Message Block describing Chargin' Chucks. They can skip it or read about it. Then, Mario and Yoshi must continue and go through the Midway Point.

After going through the midway point, the two must pass yellow Warp Pipes and another ? Block containing another Yoshi if Yoshi has been lost or a 1-up Mushroom if Yoshi is already obtained. Then, Mario and Yoshi encounter Monty Moles who, by surprise, hop out of the ground or the walls. Yoshi can stomp on these foes or move onwards. Then, they find a Rotating Block that releases a beanstalk when activated. If Mario wants to go up the beanstalk, he must do it himself as Yoshi can't climb. Up the beanstalk is several clouds and the fourth Dragon Coin along with many other coins. After doing it (or not), Mario and Yoshi must move along, pass another Monty Mole and then find the final Dragon Coin after it. Then, Mario and Yoshi find a bush with the final berry in the level. When eaten, Yoshi releases a Super Mushroom, but only if all of the other berries were eaten and a pink colored berry. Then, the two find a blue Warp Pipe. There are four Grab Blocks and six Winged Blocks. Mario can use Yoshi to double jump off Yoshi to reach the blocks or simply use the grab blocks. Five of them contain coins, while the final contains a 1-up Mushroom. When done, Mario and Yoshi are taken out of the secret area and out of a green pipe. They can then find another green warp pipe with a Jumping Piranha Plant in it. Then, the two can find a P Switch with a bunch of Turning Blocks near it. When the lower Turning Block is hit, it releases the P Switch to turn all of the coins into bricks. Mario and Yoshi must then quickly pass a Chargin' Chuck on the bricks (or on the ground) to jump into the Giant Gate to gain a high score so they can head on to Yoshi's Island 3. 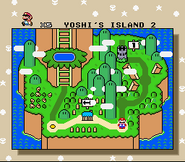 Yoshi's Island 2 in the overworld. 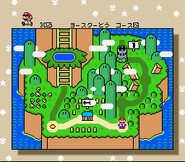 Yoshi's Island 2 in the Overworld in the Japanese version.
Deutsch Español
Community content is available under CC-BY-SA unless otherwise noted.
Advertisement