This page is about the location, for the SNES game, see Super Mario World 2: Yoshi's Island.

Yoshi's Island is a large, tropical and mountainous island inhabited by the peace-loving Yoshis. It debuted in Super Mario World in 1991; in the same game Yoshi entered the gaming series.

During the events of Super Mario World, Bowser and his children attacked Yoshi's island, forcing Mario to team up with the natives to stop the Koopa army. Bowser gave control of this island to Iggy Koopa who kidnapped a red Yoshi egg and hid away in his castle. For a full list of the levels, see Yoshi's Island.

In Super Mario World 2: Yoshi's Island, Yoshi guided Mario through Yoshi's Island as a baby. In this game, Yoshi's Island was shown to have geography and climates similar to that of the mainland Mushroom Kingdom.

In Mario & Luigi: Partners in Time, Yoshi's Island is a playable area in the past. There is a village inhabited by Yoshis, and the eggshell of the Yoob, a Shroobified massive Yoshi, is present. This area is not accessible in the present, and neither is any other area appearing in the past (considering the past Peach's Castle as the Shroob Castle).

Yoshi's Island appeared as a stage in Super Smash Bros., Melee, and Brawl, though each iteration's stage is completely different from the first.

The original version of the stage mirrors the Yoshi's Island from the Nintendo 64 game, Yoshi's Story.

The Melee version of the stage mirrors the Yoshi's Island from Super Mario World. Lining one side of the stage is a sideways Warp Pipe, with a hill on the other side. Special blocks are found here. The player can jump on them, but if they are hit, the player falls through them until they stop spinning. 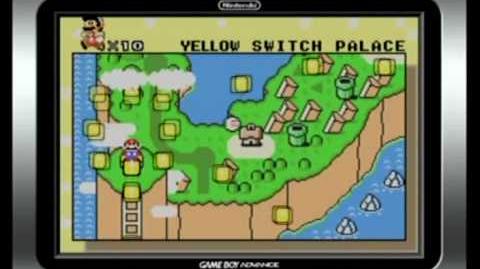