This level takes place mostly underground. The player starts above ground and walks through a pipe. Underground, there will be two Little Goombas and five ? Blocks, with the first one holding a Magic Mushroom or Fire Flower. The other four contain coins. Following this is a block tower structure, where a Little Goomba strolls by, and there is a Brick Block holding ten coins. Further on are some Brick Blocks, one of which holds a Starman and some coins, with two Koopa Troopas below them.

The player will then approach an area filled with Brick Blocks, with a Koopa Troopa and five Little Goombas. By breaking the blocks, the player can reach and walk across the top of the level. There will also be a Brick Block with a power-up and a hidden 10-Coin Block. The player will eventually come across a pit and, followed by a block platform that allows the player to obtain a 1-Up Mushroom. There will then be two Little Goombas and three pipes, all of them with Piranha Plants inside. The first pipe leads into a secret room where the player can collect coins and strike another 10-Coin Block.

The player can exit the area by a Warp Pipe in the far right. This pipe leads to the third one in the main area. There are two gaps, with two ground blocks and some Brick Blocks in between. What follows is a small, pyramid-like structure with two Little Goombas. Further up are some lifts that move in a vertical direction. The first one moves downward while the right one moves upward. Lying between them is a platform with a Koopa Troopa and some Brick Blocks, with the final block on the right holding a power-up. There is a pipe that leads to the final area. The lifts can be used to help the player access the top path that leads to the hidden Warp Zone. The Warp Pipes are arranged from right to left. The first pipe leads to World 2, the second one leads to World 3, and the third one leads to World 4. If the player enters through the regular pipe, they will be lead back to the overworld, where there is a pipe containing a Piranha Plant. What remains is the staircase with the flagpole right after it.

In Super Mario Bros. Deluxe, there are five Red Coins and a hidden Yoshi Egg to collect. The player will also obtain a medal based on their score. The target score for this level is 38000.

Note: The Warp Zone has been altered to include several Brick Blocks, three ? Blocks, some coins, and a power-up before the pipe leading the flagpole. 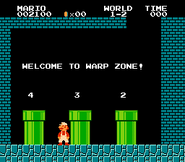 Warp Zone at the end of the level.
Add a photo to this gallery

Retrieved from "https://mario.fandom.com/wiki/World_1-2_(Super_Mario_Bros.)?oldid=278288"
Community content is available under CC-BY-SA unless otherwise noted.