Ground Pound
Starman
Wigglers (ハナチャン, Hanachang) are caterpillar-like insects with a segmented body and comically large nose. Wigglers are most commonly depicted as being yellow (occasionally green) and having a cheerful expression on their faces; they also wear small flowers on their heads. When enraged, which occurs when a Wiggler is injured, the creature turns a bright red color, gains solid white eyes and fangs and its flower wilts. Wigglers first appear in Super Mario World, being found in wooded areas.

Although usually generic enemies in games such as New Super Mario Bros. and Super Mario Galaxy, some appearances feature Wigglers, usually gigantic in size, as boss characters, an example being Super Mario 64. In spin-off games, the appearance of Wigglers is infrequent, although one does appear as an unlockable playable character in Mario Power Tennis and as a boss to race against in Mario Kart DS. In Mario Kart: Double Dash!! there are Wiggler Buses in the Mushroom Bridge and Mushroom City courses, which act as obstacles. Wiggler was featured again as a playable character in Mario Super Sluggers on the Nintendo Wii. He is a strong hitter with great speed, and a great asset to any Mario baseball team. Fuzzy Wigglers are found in Yoshi's Story. They are green and give Yoshi a melon.

Wigglers are the centerpiece of the mini-game "Which Wiggler?" in Super Mario 64 DS, where the aim is to locate and select the Wiggler that matches the one on the top screen by touching it with the stylus.

In Super Mario RPG: Legend of the Seven Stars, the Wigglers appear in the Forest Maze. If the player jumps on the head of the Wiggler, Mario will gain one coin. If the player manages to jump on it 10 times in a row, the player will gain a Frog Coin instead of a regular gold coin. They have 120 HP in that game.

In the Super Mario World animated series, Wigglers, though referred to as caterpillars and always drawn in their angered form, appear in various episodes. A Wiggler also makes an appearance in Super Mario Adventures comic and the taxi cabs of the Super Mario Bros. film are shown to be named Wiggler Taxi in one scene.

The likeness of Wiggler makes its first Mario Kart appearance in Mario Kart: Double Dash!!. Borrowing its green color from Super Mario Sunshine, long Wiggler-like buses appeared as part of the traffic in Mushroom Bridge and Mushroom City. Unlike the cars and trucks, which simply made racers spin out, Wiggler Buses flipped racers over. They are also immune to all items and attacks; if a player with a Starman hits a Wiggler, they will simply bounce back.

In Mario Kart DS, Wiggler is the final boss on Level 7 in Mission Mode. A racer must beat Wiggler in a race on Mushroom Bridge by staying at the fastest rate possible. Wiggler gets faster after each lap has passed.

In Mario Kart Wii, two Wigglers appear in the brown pad in Maple Treeway. Bumping into them pushes racers back.

In Mario Kart 7 Wiggler appears as a playable unlockable racer in the Cruiser class. You can unlock him by winning 150cc Leaf Cup. They also appear in Maple Treeway in Mario Kart Wii.

The Wiggler is a giant green caterpillar that appears in Super Mario Sunshine. It is seen in episodes two and three of the Gelato Beach area. In Japan, this Wiggler is referred to as Boss Wiggler.

During this episode, the Wiggler is curled up on top of the sand bird tower. The goal is to point all three mirrors at it to force it off. This is done by removing the Plungelos off each mirror causing them to tilt in its direction. After this is done, the giant falls off and a Shine Sprite appears.

In this episode, the Wiggler is seen awake and furious at Mario's actions. It will stomp around the stage furiously. In order to defeat it, the player must spray the sand buds with water causing the sand sculptures to rise. The monster will trip and land upside down. During this time a ground pound must be done on a designated body part. Each time this is done, the Wiggler will stand up and run even faster than before. This happens until it is defeated. Three ground pounds must be done to defeat it.

When it is defeated, it will turn in to a pile of sand and sink into the ground.

In Mario & Luigi: Superstar Saga and it's remake, a Wiggler appears as a mini-boss that Mario and Luigi fight after jumping on it. It appears in the Chucklehuck Woods where it had gotten stuck in the entrance of an area containing a Chuckola Fruit.

A robotic Wiggler called Swiggler appears in Mario & Luigi: Partners in Time as the first major boss of the game. He is seen draining Vim off Toads who have been stuck to trees in Toadwood Forest. He resides on the Vim Factory tower. Once Mario, Luigi, and the Babies make it up there, they battle Swiggler and beat him and the get their second Cobalt Star Shard only to have both stolen by Baby Bowser and Kamek who proceed to flee to Yoshi's Island Mario, Luigi, and the Babies in hot pursuit.

In Mario & Luigi: Bowser's Inside Story, a Wiggler appears as a boss that Bowser is forced to fight after...a bit of memory loss, plus aggression issues after Bowser was forced to eat a Giga Carrot. He's fought in Dimble Wood. Another Wiggler (or the same one...it's hard to tell) later shows up when Mario and Luigi are trying to find the Attack Pieces in the woods in order to get the last of the 3 Star Cures.

A Wiggler by the name of Wiggly appears in Mario & Luigi: Dream Team. He was angered into a fight after Popple thought he was a security guard and Popple kept saying bad things about him. Wiggly was eventually defeated and he chased of Popple.

A Wiggler appears as an ally and a boss in Mario & Luigi: Paper Jam. It is seen residing in Gloomy Woods which Paper Kamek and Kamek have trashed with their magic. This Wiggler is very similar to the one found in Paper Mario Sticker Star in a way. Mario, Luigi, Starlow, and Paper Mario feed him fruits so he can exchange them by clearing Paper Kamek and regular Kamek's trash. At the end of the woods, Paper Kamek casts a spell on Wiggler brainwashing him causing him to turn on Mario, Luigi, Starlow, and Paper Mario. After defeating both the brainwashed Wiggler and Paper Kamek, Paper Kamek flees and a very weak and battered Wiggler thanks Mario and his friends for everything and then collapses (presumably dying as the Paragoombas are shown taking him to Heaven) and Mario, Luigi, Paper Mario, and Starlow mourn and cry over Wiggler's death until Wiggler comes back down alive and well as a Flutter. He thanks Mario and his friends for allowing him to take on his true form by helping him and giving him those fruits and offers to take them to Mount Brrr. Whenever you talk to Flutter, he'll always offer to take you to Mount Brrr or Gloomy Woods depending on where you are.

In Mario Party DS, a Wiggler appeared in the first board: Wiggler's Garden and asked Mario and his shrunken friends to remove a Piranha Plant tearing up Wiggler's Garden. The gang accepted and defeated the plant monster. Wiggler happily gave up a Star Piece as a Reward. Wiggler also appeared as a friend badge and trophy.

Wiggler appears as a boss in Mario Party 9 for the Toad Road stage. When his HP goes down halfway, he gets angry and turns red. You defeat Wiggler by ground-pounding on each segment of his body. His own minigame is Wiggler Bounce.

Wiggler is an unlockable character in Mario Power Tennis, marking his first playable role. Bowser Jr's former voice actress also voices as Wiggler for the first time. Unlike in other appearances, this Wiggler's body is curved upwards and has two gloved hands to hold a tennis racket. He is a defensive type, like Waluigi. He has the best reach in the game, but his swing ends slowly, and he lacks power and speed. His power shot is Anger Management, where he becomes mad and spins and hits the ball. Receivers that do not use their defensive power shot are knocked back and spun in a tornado, making lunges difficult. His defensive power shot allows him to morph into a Flutter and fly to get the ball. If Wiggler wins, he becomes overjoyed and becomes a Flutter, but when he loses, he transforms into his angry form. As with all characters, this Wiggler has a trophy-winning sequence. Luigi and Diddy Kong present Wiggler his trophy, but Diddy Kong accidentally rolls a tennis ball which causes Wiggler to trip. Diddy Kong and Luigi become very anxious, knowing full well that Wiggler will blow up in anger, but Wiggler notices his trophy and calms. Luigi goes to him to see if Wiggler is okay, but Diddy accidently trips on the ball, losing his footing and falls into onto both Luigi and Wiggler. Luigi and Diddy Kong then panic and flee as Wiggler turns red with anger and begins to chase them.

Once again, Wigglers appear in Super Mario Galaxy but this time as a standard enemy in the Honeyhive Galaxy. Not so standard, because when you Ground Pound in a part of his running zone and if it stays laid down, it will anger, become dark red and keep running for a while. When running around enough, it returns calm. Ground Pounding directly in a segment of its body will kill it instantly.

Only one Wiggler appears in Paper Mario: Sticker Star and is more of an ally than an enemy. This Wiggler plays a big role as appears in World 3 where it is first woken up by a Trumpet. This Wiggler's personality is more of a little kid that loves to play. The Wiggler wants Mario and Kersti's help to help clean up the forest so he can eat again. He takes the duo to his house but unfortunately is split up into five different segments by Kamek. Only his head remains and his other four segments start running lose in World 3. After Mario and Kersti get all four pieces back, Wiggler is put back together and is happy to take the two over to the source of the poison: Whitecap Beach. As Wiggler is easily crossing the poisonous ocean, Kersti realizes that Kamek had split up Wiggler because he knew that the Wiggler could cross the ocean with no problem. After Mario defeats the source of the poison Gooper Blooper, the forest is poison free and the Wiggler is free to eat all he wants. The Wiggler isn't seen again until before World 6 where he is now a full grown Flutter. With his new wings, the Flutter takes Mario and Kersti up into the skies for the final showdown with Bowser. 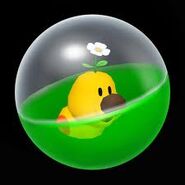 Retrieved from "https://mario.fandom.com/wiki/Wiggler?oldid=284979"
Community content is available under CC-BY-SA unless otherwise noted.