White Mage is a character from Final Fantasy series, which has appeared in Mario spin-offs. She made her first appearance in the Mario game Mario Hoops 3-on-3, and returned as an unlockable character in Mario Sports Mix.

White Mage has short red hair pink, with a tuft on her right eye, and her eyes are bluish green. She wears jewelry that includes earrings, a brooch and a crystal-adorned tiara.

White Mage is voiced by Noriko Iwahara in Mario Hoops 3-on-3, but Bianca Allen takes over the role in Mario Sports Mix. 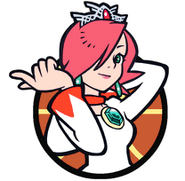 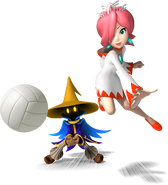 Mario Sports Mix icon 2
Add a photo to this gallery
Retrieved from "https://mario.fandom.com/wiki/White_Mage?oldid=256401"
Community content is available under CC-BY-SA unless otherwise noted.