Wario reads a newspaper and discovers that recent ancient ruins have been discovered. He hops in his car and drives off to the ruins to try to hog the money for himself. While in the ruins, Wario has to defeat four bosses, and their leader Golden Diva, in order to save a princess trapped in the temple.

Gameplay in Wario Land 4 is much like gameplay in previous Wario Land titles. It is primarily focused around platforming, using Wario's unique transformation abilities to obtain large amounts of jewels and wealth.

Wario's primary attacks are jumping and elbow attacks, but unlike the previous Wario games, Wario can charge his attacks using the shoulder buttons. The more powerful moves give Wario a degree of invincibility and allows him to smash through thicker green blocks.

There are four different chambers in the ruins that have four levels and a boss. All but one of the levels has a distinct template. Wario has to go through each level and obtain four pieces of a crystal (used later as a key to access the boss) before hitting a device that activates a time bomb. Wario has to escape the level via portal in the allotted amount of time. There is a strange, bird like creature with a key that Wario has to capture in order to progress into the next level.

Wario cannot get a game over. He has a health bar of eight hearts while in levels and boss fights. There is also a smaller gauge below the heart meter. Whenever Wario attacks an enemy, they leave not only coins, but a red orb that Wario can collect to fill up the gauge. When the gauge is filled up, Wario obtains a new heart. When Wario can obtain no more new hearts and the gauge is filled, Wario obtains a 500 point silver piece with every enemy he defeats.

There are a number of transformations that Wario has to use to progress through the eighteen levels in the game. 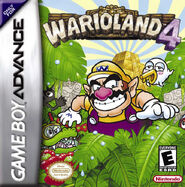 Wario Land 4's boxart for North America.
Add a photo to this gallery
Retrieved from "https://mario.fandom.com/wiki/Wario_Land_4?oldid=275091"
Community content is available under CC-BY-SA unless otherwise noted.