It was later re-released on the Nintendo 3DS's Virtual Console. The 3DS's release is currently only in Japan.

While flying his plane over the jungle, Wario experiences technical problems and his plane crashes into the brush below. After emerging from the wreck, Wario stumbles into an old cave where he finds a snow globe-like music box. He is sucked into the globe and awakes to find himself in a dark temple where he is greeted by a mysterious hidden figure who enlists Wario's help in obtaining five music boxes that were spread across the music box world. He claims that those five music boxes are cursed and keeping him, the rightful ruler of the Music Box World, powerless. Wario agrees to help him when the hidden figure offers to let Wario keep all the treasure he finds. 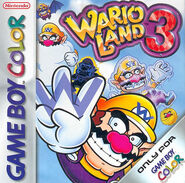 The European boxart for Wario Land 3.

The Japanese boxart for Wario Land 3.

The title screen for Wario Land 3.

Selecting a language in Wario Land 3.
Add a photo to this gallery
Retrieved from "https://mario.fandom.com/wiki/Wario_Land_3?oldid=250793"
Community content is available under CC-BY-SA unless otherwise noted.