WarioWare, Inc.: Mega Microgame$!, (known as WarioWare, Inc.: Minigame Mania in Europe), is the first WarioWare game in the series created in 2003 for the Game Boy Advance. It later was released for the 3DS's Virtual Console in December 2011 as one of the ten ambassador games. It was released again for the Wii U Virtual Console in April 2014. It was originally for testing purposes for Mario Party Advance.

This game has Wario create his own company called WarioWare along with his friends and make short minigames called microgames which started the company.

WarioWare revolves around the concept of "microgames," bite-sized minigames that last for only a few seconds. In these microgames, which are controlled by the directional pad and A buttons, the player must figure out what they are supposed to do, aided by a word or phrase that appears briefly, and clear the conditions within the time limit. These range from shooting a certain number of targets, selecting a multiple choice answer, or simply surviving until the time has passed. Players are given four lives, with the game ending if the player loses all of their lives.

The main game sees players go through several levels, each hosted by Wario or one of his friends, which are separated into various tiers that are unlocked as the player progresses. Each level is based around a specific category of microgames, such as sports, nature, puzzles, or ones based on various Nintendo games. As players play through the microgames, the speed in which they are played will increase. After a certain number of microgames are cleared, the players must play a boss game which, unlike the other microgames, feature no time limit. After successfully clearing a boss level for the first time, the level is cleared, with players progressing after clearing all levels within a tier. Completed levels can be replayed for a high score, in which the player must try and clear as many microgames before running out of lives. In these replays, the difficulty and speed of the microgames increase after each boss game encounter, which awards a bonus life if successfully cleared.

Clearing certain game conditions, such as reaching a certain level or scoring a certain amount of microgames in specific categories, unlocks additional bonus games. These include special towers with certain play conditions, such as the player having only one life, to various minigames, including two-player games that are controlled using the shoulder buttons. Minigames include Pyoro, in which players must grab falling fruit using an elongated tongue, Paper Plane, where players guide a paper airplane down safely, and Dr. Wario, a Wario-themed version of Dr. Mario.

While at home one evening, Wario turns on his TV to see a special report on video game sales going up, all due to popular games like Pyoro (shown by the reporter). After thinking for a few seconds, Wario realizes that video games may be a potential gold mine for him. The next morning, he rushes out and buys a laptop computer and immediately gets to work. He starts making games but realizes that it's hard work, so he calls his friends to come and make games. Thus, WarioWare, Inc. is formed, with Wario as President of the company.

Eventually, the company produces a game: Warioware Inc. It makes a large amount of money, and Wario takes it all for himself. He escapes the company building in a rocket, only for Dr. Crygor to crash into it, causing it to crash into the sea, along with all the company profits. Wario is later shown making his way back to dry land, with Crygor in tow, saying, "Either way, I'm still a cad! I hate everybody!"

Wario Ware, Inc.: Mega Microgame$! has won numerous awards and received critical acclaim. It was voted the winner of the Edge Award at the Edinburgh International Games Festival in 2004 by a panel of videogames industry members, academics, and journalists.

At GameSpot, it was awarded the Editor's Choice Award and was nominated for its "Best and Worst" of 2003 in the "Most Innovative Game" category.

Mega Microgames currently has an aggregate score of 88.99% at GameRankings. Reviewers wrote enthusiastically about the game. Jeff Gerstmann from GameSpot gave it a 9.1 out of 10 and praised the game for its portability, being able to play it in "short bursts" and being able to return to it again and again.[5] Craig Harris from IGN said that the sheer number of minigames, its simplicity, and replay value made the game original and great, and gave it a 9.0.

In 2008, Game Informer named the game one of the top ten weirdest of all time.

Edge ranked the game #40 on its list of "The 100 Best Games To Play Today", stating "almost every minigame is a masterclass in how to instantly captivate with clear goals and a captivating alchemy of sound, image and control."

WarioWare, Inc.: Mega Party Game$!: WarioWare, Inc. was remade for the Nintendo GameCube as WarioWare, Inc.: Mega Party Game$!, known in Japan as Atsumare!! Made in Wario (あつまれ!!メイド イン ワリオ?, lit. "Gather!! Made in Wario"). It was released in Japan on October 17, 2003, in North America on April 5, 2004, and on September 3 that year in Europe. This title features all the microgames found in Mega Microgames!, but also features multiple multiplayer games. It came out half a year after the original Game Boy Advance game. Satoru Iwata commented that it was overdoing it to come out with this title this quickly, but was also the one who requested its release. He said to the developers of the Game Boy Advance title to remake it for the GameCube and fast, and when asked how fast, he said: "as fast as possible." WarioWare, Inc.: Mega Party Games! was directed by Goro Abe, a developer of the first game, and it was his first experience being at the head of the team. It is also the first game in the series co-developed by Intelligent Systems. Goro Abe told Iwata about a talented programmer at Intelligent Systems, Taku Sugioka, who joined the project. Sugioka stated that this video game turned out to be a good experience, and helped make his next development project.

DSiWare: Two unlockable mini-games from this title, Paper Plane and Pyoro, have been released for the Nintendo DSi's DSiWare digital distribution service. Neither title uses the touch screen.

Paper Plane (紙ヒコーキ Kami Hikōki?), known in North America as Paper Airplane Chase, plays the same as the original title. There are three modes - the first is Endless, which places the player in a randomly generated course, requiring him or her to guide a paper airplane through it as it descends, attempting to get as far down as possible; Time Attack, which places the player in pre-created tracks, requiring them to get down to a certain point as fast as possible; and Race Mode, a two-player competition that is played on one DSi, with one player using the d-pad and the other using the face buttons. There are a total of eight courses in the game.

Bird & Beans (鳥とマメ Tori to Mame?), known in PAL regions as Pyoro, features both Pyoro and Pyoro 2 from the original GBA version. Both play mostly the same as the original versions, although the play area is now wider. The first requires the player to eat falling beans by shooting Pyoro's tongue in an upward diagonal direction. If a bean lands on the ground, it destroys part of the floor, limiting how much the player can move Pyoro. If the player eats a differently colored bean, it will restore one of the blocks, and eating a flashing bean restores many, if not all, lost blocks and destroys all on-screen beans. The further Pyoro's tongue is extended, the more points are awarded. If a seed lands on Pyoro, the game ends. In the second game, the player must shoot seeds at the falling beans. More points are awarded when two or more are taken out at the same time. Bird & Beans does not have any additional modes.

Anoop Gantayat, writer for IGN.com, commented that both titles, especially Bird & Beans, felt like Game & Watch titles, both lacking in frills. He also commented that they were great to play for a few minutes, and that he liked how quickly the game would load up, not having to wait for the game to go through various company logos. He commented that he would have preferred if the games weren't one-hit-kill games, saying that it hampers their replay values.

Virtual Console: In December 2011, WarioWare, Inc.: Mega Microgames! and nine other Game Boy Advance games were released to Nintendo 3DS Ambassadors, which were users who purchased and registered their 3DS systems prior to a specific date in their home markets. Nintendo has stated that there are no plans to release the game to the other 3DS users through the Virtual Console service.

The game was later released on the Wii U Virtual Console on April 3, 2014 in Japan and April 10, 2014 in North America, Europe, and Australia. 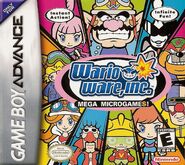