Jumping, Fire
Waddlewings (also called Flying Squirrels in the beta) are enemies that make their debut in New Super Mario Bros. U. These creatures are bright orange and resemble real-life squirrels, with a red nose, two protruding teeth, beady eyes, and a cream-colored belly.

The Flying Squirrel was first introduced in New Super Mario Bros. U. They appear most frequently in the Acorn Plains and Cloud Levels. They behave by usually gliding from side to side, but can also be seen running. They have the ability to cling to walls. They can carry Super Acorns in their hands while in the air, and will drop them if defeated. Their roles are identical in New Super Luigi U and New Super Mario Bros. U Deluxe.

While thy don't physically appear in this game, a glider players can equip to their karts is called the "Waddle Wing", in which the glider takes on the appearance of a Waddlewing.

Waddlewings make their Mario Party debut in the tenth entry of the series, where they appear inconsistently in certain minigames such as Goomba Gallop. They also appear during Mega Goomba's boss battle where they glide side to side, subtracting players' points if they were to hit them. 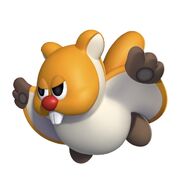 A Waddlewing Flying in New Super Mario Bros. U.

A Waddlewing carrying an Acorn.