The Villager is a playable character in this game for the DLC content along with Link and Isabelle.

The Villager is a starter character in these games. The Villager's main attack style consists of a variety of moves much like Mr. Game & Watch and Pac-Man. The Villager can use punching attacks and a balloon technique that originate from the original Animal Crossing where NES games like Punch-Out! and Balloon Fight were available. The Villager's final smash is called Dream Home where the Villager pays off their house to Tom Nook and the house is build onto opponents. After the house is built, it will explode causing a shockwave that will send players flying, along with the Nooks. The Villager appears in this game along with Isabelle (who is an Assist Trophy) and their home stage is Tormitor Island. The player can choose between male and female versions of the Villager. 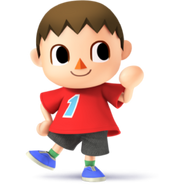 The Villager from Super Smash Bros. 3DS/Wii U.