MarioWiki
Register
Don't have an account?
Sign In
Advertisement
in: Articles in need of cleanup, Enemies, Thwomps,
and 16 more
English

Thwomps are semi-common enemies in the Super Mario franchise. They first appeared in Super Mario Bros. 3 These large stone creatures hide in ceilings, biding their time until Mario passes under them, and they will fall down in an attempt to crush him. They are usually either blue or gray in color, and may be covered in spikes. Thwomps are apparently immune to lava (despite being made of stone, which is not molten), as they will fall in on the castle levels, and then rise right back out. This makes them efficient elevators if you can get on top of them. Thwomps can vary in their sizes.

Thwomps first appeared in castle levels in Super Mario Bros. 3, where they were covered in spikes, and Mario would die after simply touching them.

Thwomps appeared again in Super Mario World and were exactly the same as they were before, but there was also a new variety of Thwomp called a Thwimp that could move freely while going up and down, and was much smaller than a normal Thwomp. The name Thwimp may come from the fact that they are smaller, and hence more wimpy. This is probably a pun.

Thwomps appeared again in Super Mario 64, where they had no spikes, and

would keep going up and down instead of only crashing down when Mario went under them. Unlike their prior two appearances, these Thwomps can be touched without fatality. They also take out only three wedges of life. They were used mainly to get to higher places. they were very rare in this game, two appear in Whomp's Fort and 1 appears in Tick Tock Clock. New species of Thwomps include Whomps which appear in Whomp's Fort under control of the Whomp King. In Super Mario 64 DS, the non spiked ones do not appear in the game, being replaced by the normal spiked ones, but you can still go on top of them.

Thwomps appeared in Super Mario Galaxy where they appeared several times as large as they normally are depicted and with flat sides. Instead of waiting for Mario to walk underneath them, these large Thwomps continually crash up and down. Super Mario Galaxy was the first game to feature Thwomps with 2 faces, one at their front and one at theor back. If Mario gets crushed under their bulk, he will die, regardless of how much health he has. They appear in the Buoy Base Galaxy, the Beach Bowl Galaxy, and Bowser's Star Reactor and Galaxy Reactor. Thwomps have a faster variation that can be encountered in the latter area.

A single Thwomp appeared as a non-playable character who hosts a game. He charges 200 coins before Mario and Luigi play the minigame. In the remake, his sprite looks wider than the original.

A Thwomp is an enemy in most Mario games. It floats in the air, and after a while, it crashes into the ground. In Mario Kart, it does the same to crush or stop racers. It is stone, and when it frowns, it comes down.

Thwomps always appear in Bowser's Castle. In one instance, they appeared on Rainbow Road.

Thwomps appeared in each Bowser Castle track. These Thwomps are the first to not feature spikes. They became "active" on the second lap. Blinking Thwomps appeared on Rainbow Road. These unique Thwomps caused racers to spin out on contact, as if they are using a star.

These Thwomps were based on their appearances in Super Mario 64, and were only seen once. They could make racers going at a high enough speed spin out.

The Thwomps in Mario Kart: Super Circuit behaved similarly to the way they did in Super Mario Kart. They appear in all four Bowser Castle tracks.

Thwomps appear in Bowser's Castle. They are much bigger than their previous incarnations. These become standard in the following games. There is a glitch that happens and the Parade Kart gets stuck upside down until you use a Thunderbolt.

Thwomps appear in Bowser's Castle and the GBA version of Bowser Castle 2.

Thwomps have played a major role in the Mario Party series. Thwomp, along with Whomp, is the host of Whomp and Thwomps Back Room that appears in Mario Party 4. Thwomp also appears as a Duel Mode partner in Mario Party 3. When chosen as a partner, they will pound on the opponent's partner and cause them to vanish. They are commonly found as obstacles on boards and mini-games. They also appear as an item in several Mario Party games.

Thwomps appear as obstacles in The Sand Tomb, a field in Mario Strikers Charged.

Thwomps are found only in certain castles such as world 4 or the final castle.under them are usually x blocks warning you where they will crash.

There is a time hole on the third floor which leads to Thwomp Volcano, where evil Thwomp-like blocks appear as common enemies (as well as other places). Also Mrs. Thwomp, a roundish, rockish Thwomp appears as a boss, her husband as a transport to inside and outside of the volcano, Thwomps appear as hosts for mini-games inside the volcano, and a Thwomp is an elevator to get down the floors. If you return later, you can't use this elevator as it crashed on the floor after you fought Bowser and Baby Bowser.

Thwomps appear in Super Princess Peach in World 8 Bowser's Villa. There is a Big Thwomp where it will flutter it's eyes for a second or two, open them, glance around, then shut them again. When it's eyes flutter, the player has to look at the statue and make Peach do what it's doing before its eyes open. If not, you'll will be sucked into its mouth and will have to start from where you entered.

Thwomps appear as a trophy in Super Smash Bros. Melee. Kirby also turns into one sometimes when using "Stone".

Thwomps spend most of their time suspended in midair, waiting. When Mario passes below, they crash down with amazing speed. As you may guess from their appearance, they're heavy and solid enough to make any attack on them futile. Small ones are called Thwimps: despite their weight, they often form groups and bounce around.

'Thwomp' is most likely the onomatopoeia for something large and strong hitting the ground with great force.

A Thwomp from Super Mario 64

A Thwomp from Super Mario Bros. 3

Artwork of a Thwomp from Super Mario Bros. 3

A Thwomp from Super Mario RPG: Legend of the Seven Stars

A Thwomp in Super Mario Galaxy

A Thwomp from the Mario cartoon

Kirby as a Thwomp in Super Smash Bros. Brawl

A Thwomp from Mario Kart 64 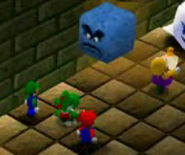 A Thwomp from Mario Party

A Thwomp from Mario Party 3

A Thwomp from Mario Party 5

A Thwomp from Mario Party 6

A Thwomp with Bowser

A Thwomp from Super Mario Bros. 3

A Thwomp from Super Mario Kart 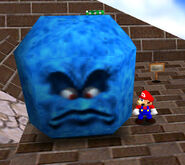 A Thwomp in Super Mario 64

The different types of Thwomps from The Legend of Zelda: Link's Awakening 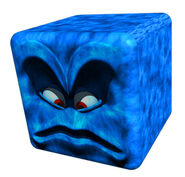 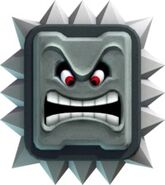 Another Thwomp in the cartoon.