The Great Tree is a location in Paper Mario: The Thousand-Year Door. It is located beyond Boggly Woods and is where the majority of Chapter 2 takes place in. Its interior serves as the third main location in the game. It is located in Boggly Woods and is the home of the Puni tribe. When Mario first arrives here, the entrance is sealed by a strange, metal door, which prompts him to take Punio to see Flurrie; the door is a result of the X-Nauts residing in the tree. There is actually a secret entrance in the Great Tree. Mario must use Flurrie to blow away "paper" that covers this entrance, which Punio proceeds to enter, prompting him to open the sealed door that Mario can walk through. However, the secret entrance is anything but secret as it is labeled "Secret Entrance" and is surrounded by flashing lights.

The Emerald Star is located within the tree since 1,000 years ago after the Shadow Queen was imprisoned the Goomba hero gave the Crystal Star to the Punies to keep safe. As such, Lord Crump and his X-Naut troops invaded the place to find it, even if that meant teaming up with the Jabbies (the rivals of the Punies), and additionally, imprisoning the Punies. Punio enlisted the help of Mario, Goombella, Koops, and Flurrie to liberate the Punies, take down the Jabbies, retrieve the Emerald Star, and drive the X-Nauts out of the Tree. Mario also obtained the Super Boots while he and his friends were here. After Mario and his friends find the Emerald Star, Crump steals it and activates a five-minute (300-second) time bomb. With the system active, Crump made his way to the entrance, but his escape is cut off by the Puni elder; with her help, Mario, Goombella, Koops, Flurrie and the other Punies were able to catch up with him, demanding that he surrenders the Crystal Star and leave the tree forever. However, instead of surrendering, Crump is forced to deactivate the time bomb and activate his robot, Magnus von Grapple and attack Mario and company. After defeating the robot, Crump and the X-Nauts are driven out of the tree and Mario is given the Emerald Star as a reward. A shop is also found here.

The Great Boggly Tree is a massive tree that is monochrome in color. It also now has a metallic door installed by the X-Nauts and there is a secret hole that the Punis can access to get inside.

Mario and his friends head into The Great Tree after learning a Crystal Star is located there. Punio leads them there but the front door has been replaced by a metallic one that is already locked. Punio remembers of a secret way to get inside but they must have Flurrie. Mario and the others then come back with Flurrie and she uses her wind powers to reveal the secret passageway and head inside. However, Mario soon finds himself fighting a couple of X-Nauts and defeats them in battle. Mario quickly learns that the X-Nauts are also after the Crystal Star and tries to find a plan. Punio also notices that most of the Punis are gone and urges Mario to try and free the Elder first. Mario heads upward and finds all of the Punis locked up in cages. The Puni Elder is locked up by herself in the red cell and the majority of the Punies, including Punio's sister, are locked up in the blue cell. Mario then heads into the next room and finds Ms. Mowz near a knocked out X-Naut. She tells Mario that she is just looking for some more rare badges and tells Mario that the Crystal Star is, indeed, located somewhere in the tree. As Ms. Mowz leaves through the window, the X-Naut wakes up and attacks Mario thinking he was the one that knocked him out. Mario defeats him in battle and retrieves the Red Key. Mario and Punio unlock the red cell but the Puni Elder yells at them for not freeing the others. After a long story, the Puni Elder entrusts Mario and Punio with 10 Punies and must use them to free the others. Mario, Punio, and the Punies all head downward to try and find the Blue Key to free the rest of the Punis.

In the outside area, it's in the waterfall to the right of the tree.

In the second room above the entrance area, it's in the southeast bush on the ground.

In the storeroom in the highest place, it's dropped after defeating the X-Naut guard.

In the storeroom in the highest place, it's inside the left chest. (The right chest is opened by Ms. Mowz.)

The Great Tree as it appears on the map 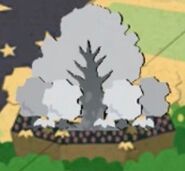 To the right of the bubble pond in the Great Tree. 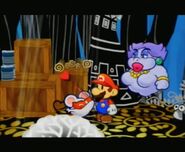 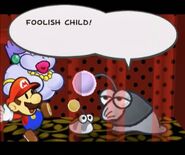 The Puni elder scolds at Punio. 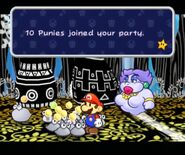 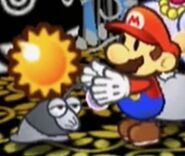 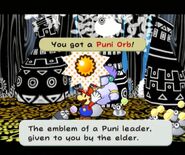 In the lower right corner of the bubble pond area in The Great Tree.

Flurrie in the 3 partner selection.

On top of the big stone in the lower-left of the room beneath the bubble pond in the Great Tree. Accessible with the airplane panels, the first of which can be used by blowing up the jar with Flurrie.