The Flying Krock is the seventh and final world appearing in Donkey Kong Country 2: Diddy's Kong Quest. It is also the sixth world in Donkey Kong Land 2. The world itself is where Donkey is held captive by K. Rool.

This world comes directly after K. Rool's Keep in both games. It comes after Stronghold Showdown, an area where a cutscene of Donkey is seen being taken up to The Flying Krock (In the Game Boy Advance version, it is a boss battle with Kerozene).

As with levels, there is only a single level called Screech's Sprint where Diddy and Dixie must transform into Squawks and race Screech, Kaptain K. Rool's parrot whom is his pet. Funky and Wrinkly also are in Funky's Flights II and Kong Kollege respectively as allies to Diddy and Dixie before the final battle.

There are quite a lot of background elements in the area in Donkey Kong Country 2. Surprisingly, most haven't been removed in the Game Boy Advance version, unlike most other areas including the Monkey Museum. Some background elements have even been added in the foreground of the area. The elements are: 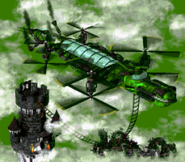 The Flying Krock's battle arena in the Game Boy Advance version of Donkey Kong Country 2.
Add a photo to this gallery

Retrieved from "https://mario.fandom.com/wiki/The_Flying_Krock?oldid=233568"
Community content is available under CC-BY-SA unless otherwise noted.