Takashi Kondō
Terry Bogard is is a prominent character in several of SNK's fighting game series. He is the main protagonist of the Fatal Fury series and one of the major supporting characters in The King of Fighters, and as such he is widely considered one of SNK's most iconic characters.

Terry Bogard is an American martial artist known for his charisma and friendliness. His fighting style is a mix of various techniques from a variety of martial arts, including boxing, kung fu, and kickboxing, in addition to the fictional martial art Hakkyokuseiken from his master Tung Fu Rue. Outside of fighting, his other hobbies include playing video games and basketball. Terry also has a love interest, "Blue" Mary Ryan, and a pet monkey named Ukee. 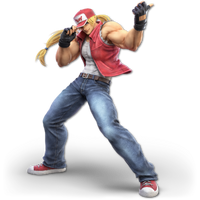 Terry appears as a newcomer in Super Smash Bros. Ultimate, with his inclusion being announced during a Nintendo Direct on September 4, 2019. He is the fourth DLC character of Fighters Pass Vol. 1, and was released on November 6th, 2019.

The overwhelming majority of Terry's moveset consists of attacks he has used throughout the Fatal Fury and The King of Fighters series, although his up aerial is unique to Ultimate because of the lack of a reasonably corresponding attack. Like Street Fighter representatives Ryu and Ken Masters, Terry always faces his opponent during 1v1s, and several of his normal moves can be canceled into his special moves.

Uniquely, Terry also possesses a number of mechanics from his home series: he has access to a dodge attack, a backward special move (Crack Shoot), and two super special moves (Buster Wolf and Power Geyser). However, his super specials only become usable when his damage percentage reaches 100% (or 30% of his starting HP in Stamina Mode).