Yo! What's going on?

0
Terrapins are a species of Koopa that are armored with a green shell. They are encountered in Bowser's Keep in Super Mario RPG: Legend of the Seven Stars. They are the weakest members of the Koopa Troop, with a HP of ten and an attack of one. Their defense is eight and their defense against magic is one.

Terrapins will fight alone or in groups of two to four. They attack by punching which deals a damage of one. They are encountered patrolling the halls of Bowser's Keep and are seen mainly in the beginning of the game, before Exor invades Bowser's Keep. 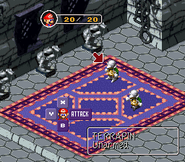 Mario, preapring to attack a Terrapin. 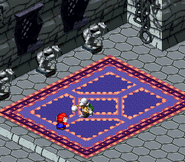