MarioWiki
Register
Don't have an account?
Sign In
Advertisement
in: Items, Power-ups, Items in Super Mario Bros. 3,
and 2 more
English

Transforms Mario into Tanooki Mario.
The Tanooki Suit is an item appearing in the Mario series. It is not to be confused with the similar power-up, the Super Leaf.

The Tanooki Suit made its first appearance in Super Mario Bros. 3.

Once the suit is worn, Mario can fly (similarly to the Super Leaf and Cape Feather) and turn into a statue. Turning into a statue will allow him to avoid any enemy, and will also allow him to defeat most enemies.

While the item form doesn't reappear in Super Mario 3D Land, the effects of the Super Leaf can be obtained to resemble the appearance of Mario in a Tanooki Suit. Mario can still use his tail to strike objects, but with the Super Leaf, he cannot fly nor turn into a statue.

A new power-up, the Statue Leaf, also grants Mario an advanced Tanooki Suit which does allow Mario to become a statue.

The suit is based on the tanuki, a Raccoon Dog native to Japan which is featured heavily in Japanese mythology. The statue has the general appearance of Jizō, with Mario's mustache. 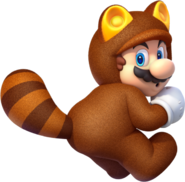