Swoopers, (also called Swoops), are bats that first appeared in Super Mario World and since then, Swoopers have become recurring enemies, appearing in several other games, including main-stream and spin-off ones, Swoopers are mainly seen residing in caves or other dark/haunted areas. A similar species known as Buckies also appears in Donkey Kong: Jungle Beat.

In Super Mario World, Swoopers hang from the ceilings of caves upside down, waiting for Mario or Luigi to approach. When they come near, the Swoopers fly down and try to hurt Mario and/or Luigi. They can easily be defeated by with a stomp and basically any other attack. They can also be defeated by Fire Mario, Cape Mario, and being eaten by Yoshi. They are mainly found in Vanilla Dome, though they first appear in Donut Plains 2.

Swoopers were originally going to be blue in this game, but they became green in the final version. However, their blue color scheme would later carry over to all other Mario games after this game.

Swoopers also appear in Super Mario 64 and its DS remake. They are found only in Hazy Maze Cave, these Swoopers are recolored from green with brown wings to blue with purple wings, which would go on to be their color scheme in future appearances. Like in Super Mario World, they hang still on the ceiling waiting for Mario to come, then fall off the ceiling and flutter in place briefly before dashing towards its victim. Swoopers can be defeated with any attack, defeating a Swooper will cause it to drop a Coin.

In Super Mario 64 DS, Swoopers behave as they did in the original however their appearance has been updated to be more modernized. Additionally, Yoshi can defeat a Swooper by swallowing one. Yoshi cannot transform Swoopers into eggs instead he is immediately awarded with a Coin.

Swoopers appear in New Super Mario Bros., like in Super Mario 64 DS, they hang on the ceiling waiting to attack. A rare one appears in World 2-3 whereas the other 12 appear in World 5-2. They are blue and have purple wings which mostly resembles their design in Paper Mario and Super Mario 64 DS. Swoopers can be defeated with stomps or the effects of a Fire Flower, Blue Shell, Mega Mushroom, or a Starman.

Swoopers appear in New Super Mario Bros. Wii. They look just like their New Super Mario Bros. counterparts, and behave exactly the same, darting down on the heroes as they approach. They appear in World 5-2 and World 6-6. In this game, their eyes also glow in the dark giving you a bit of a hint as to where they are in darker caverns. Swoopers can be defeated with stomps or the effects of a Fire Flower or Starman. Swoopers can also be frozen with the effects of an Ice Flower or Penguin Suit to be used as icy platforms to reach higher ledges. Swoopers can also be trampled by Mega Wigglers.

Swoopers reappear in New Super Mario Bros. 2 behaving exactly as they did in the previous games. They only appear in World 5-

. They once again attack by darting at Mario (or Luigi) whenever they approach and can be defeated with either stomps or the effects of a Fire Flower, Super Leaf, Starman, Gold Flower, or an Invincibility Leaf. Swoopers are also slightly slower in this game.

Swoopers also appear in Super Mario Run as enemies commonly found in caves, they behave as they did in previous games and can be defeated with stomps or the effects of a Starman. Swoopers are commonly required for reaching higher platforms but due to the auto-running feature, this requires accurate timing.

Swoopers appear in various courses in the Mario Kart series as hazards. They are usually seen flying in large numbers through caves. Contact with a Swooper will bring the kart to a stop. Swoopers can be found in courses such as Banshee Boardwalk, Wario's Gold Mine, Dry Dry Ruins, Rock Rock Mountain, and Yoshi Valley. Aditionally, there is also a glider based on the Swooper in Mario Kart 7 and Mario Kart Tour. In the series, they are found in Mario Kart DS, Mario Kart Wii, Mario Kart 7, Mario Kart 8, and Mario Kart 8 Deluxe. A Swooper can be knocked back with the use of a Shell or Starman.

Swoopers made their RPG debut in Paper Mario, where they are commonly found in Dry Dry Ruins. They often hang on to ceilings, like they do in Super Mario World. Mario would need to use Quake Hammer or a Dusty Hammer in order to ge them down to fight them normally. Their attack is to simply ram into Mario.

Swoopers reappear in the sequel to Paper Mario, where they behave similarily to the previous game. However, they have been given a new ability to where they can suck out Mario's HP. A fighter named Sir Swoop is introduced to take King K.'s place in the Glitz Pit. He is fought like a normal Swooper.

Swoopers are found once more in the thrid entry of the Paper Mario series. They are commonly found in Merlee's Mansion Basement, where they hang on to ceiling and drop down to attack when Mario is nearby, similar to what they do in the Super Mario games.

Swoopers appear once again in the action-adventure title of the series. They are only found in World 2. They are fought identically to Paper Mario. Interestingly, they were some of the few enemies to not be redesigned to there New Super Mario Bros. appearance, as they retain their purple coloring. In the European version of the game, they are referred to as Swoops.

Paper Swoopers appear in Mario & Luigi: Paper Jam, being the only enemies in the game to where their 3D counterparts are never fought. They fight in stacks.

Swoopers are once more fought as normal enemies in this entry. They fight almost exactly the same as they do in Paper Mario: Sticker Star. They can also be fought in stacks, similarily to how they are fought in Mario & Luigi: Paper Jam.

Origami Swoopers are set to appear in the upcoming game in the series. 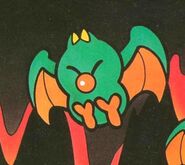 A Swooper from Super Mario World