Swanky Kong is a member of the Kong Family appearing in the Donkey Kong series.

During gameplay, he has quizzes for Diddy and Dixie and with questions for them to answer carefully. An incorrect answer ends the quiz (makes Diddy and Dixie fall through that incorrect star in the remake). The first quiz always costs a single Banana Coin with an award of a single Extra Life Balloon if completed, two in the two priced quiz and three in the three priced quiz.

In the Game Boy Advance version, Candy is seen to be his assistant in the game. Though, she only points to where the monkeys walk on a specific star and therefore has no role.

In the game, he runs a new area called Swanky's Sideshow where Dixie and/or Kiddy have to challenge Cranky in a game of throwing the ball on the target. The cost of a game is two Bear Coins. He is seen in a barrel when outside the circus-themed attraction. Dixie and Kiddy win stuff like banana (bunch)es, Bear Coins and such if they successfully win the game.

In the Game Boy Advance version of the game, he runs a new area entitled Swanky's Dash. Here, his outfit comes back from Donkey Kong Country 2: Diddy's Kong Quest, possibly due to Rare lazily developing the remake. Here Dixie has to collect one hundred stars in every challenge to be awarded with a Banana Bird on the first try. As for Kiddy, he is said by Swanky that he is "too young to play".

While not directly appearing, Swanky makes a cameo in the course Donkey Kong Jungle coming from Mario Superstar Baseball. Here, he can be seen on a billboard with his Donkey Kong Country 3 artwork and text saying DK Cannon. His tent also appears in the background of the stage. 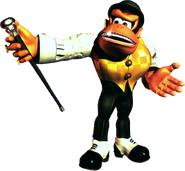 Retrieved from "https://mario.fandom.com/wiki/Swanky_Kong?oldid=277549"
Community content is available under CC-BY-SA unless otherwise noted.