Template:Locations Swanky's Sideshow is a competitive game between Dixie/Kiddy and Cranky ran by Swanky. This game only appears in the Super Nintendo Entertainment System version of Donkey Kong Country 3: Dixie Kong's Double Trouble!. It is succeeded from Swanky's Bonus Bonanza and is replaced by Swanky's Dash in the Game Boy Advance version.

This game costs two Bear Coins in total to play. If won, Bear Coins and banana (bunches) are won.

In this game, Dixie/Kiddy must challenge Cranky to throw balls at the targets (with a Kremling making a cameo on it) to see who is able to break the most targets. Apparently, like usual, Cranky rambles a lot if he loses.

There are three versions of the game to play; the first is "Head to Head" on which Cranky and the monkeys must compete in a match and miss as few targets as possible. Hitting a target gives points to the meter. Whoever gains the filled meter first wins the minigame.

The second version is "Race to 25". This minigame has Dixie/Kiddy race Cranky upon seeing who can hit twenty five targets first.

The third version is "Endurance". In this version, Dixie/Kiddy must race Cranky to see who is able to hit the most targets before missing one. Whoever misses the first target loses.

While not many easter eggs are found in this area, they are mainly plush toys in the background scenery of the competing match. Their purpose is not known, but could've possibly been used for prizes for winners.

On Cranky's side, four full bananas are seen lying around in the background. Also, another normal teddy bear can be seen aside a doll. There is also a Squawks plush on the left side. 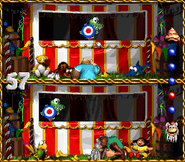 Gameplay of Swanky's Sideshow.
Add a photo to this gallery

Retrieved from "https://mario.fandom.com/wiki/Swanky%27s_Sideshow?oldid=80020"
Community content is available under CC-BY-SA unless otherwise noted.