MarioWiki
Register
Don't have an account?
Sign In
Advertisement
in: Articles in need of cleanup, Items, Power-ups,
and 28 more
English

Not to be confused with a Power Star.

Turns character temporarily invincible.
A Super Star (also referred to as Starman) is a powerful Item in the Super Mario series. In most games, they grant Mario (or any of his friends like Luigi, Toad, Peach, or even Koopa) temporary invincibility. However, they do not protect Mario or other characters who use it from falling down to lava, a bottomless pit or getting crushed. They are found in 2D and 3D Mario games, including Super Mario Land and Super Mario Galaxy; and in the Super Smash Bros. series. Super Stars made their debut in Super Mario Bros..

In Super Mario World, if Mario or Luigi happens to defeat more than 8 enemies using the Starman, the scores will change to 1Ups resulting in the player getting more extra lives similar to if they countless stomp on enemies.

In Super Mario Galaxy, it appeared under the name Rainbow Star, and Mario's transformation is renamed Rainbow Mario.

Stars were used differently in Yoshi's Island when they were smiley faced, with blue shoes. They can be found by the player by defeating certain enemies and hitting some ? Clouds. They were used when Baby Mario fell off a Yoshi's back. The Stars would somehow make a bubble around the screaming infant, protecting him from the evil Toadies until the power of the Stars ran out. Every Star collected would add one second to the Star meter, and collecting thirty of them was essential to get a Perfect on a level. Also, "Super Stars" found only in a few levels (they looked like an ordinary Starman, but with no eyes) would seal the Yoshi in a huge egg, and Baby Mario would become invincible, and somehow sport a Cape, which allowed him to glide long distances. After a certain amount of time, the Yoshi would return to normal and Baby Mario once again would seat himself on his back, losing his cape and invulnerability. There are also packs of Stars that come in ten or twenty.

A Star from Super Mario RPG: Legend of the Seven Stars. Stars have made very few appearances in the Mario RPG series. Perhaps their only appearance as an item was in Super Mario RPG: Legend of the Seven Stars, where Mario could occasionally find the rare item and use it to defeat enemies on the overworld (without having to go into battle with them). Doing this would, quite helpfully, still earn Mario Experience Points. Stars, despite being such rare items in the RPGs, are briefly mentioned in Mario & Luigi: Superstar Saga, where they are said to be an ingredient of Invincishrooms, and in Paper Mario: The Thousand-Year Door, in which a camera-wielding Lakitu near the Glitz Pit remarks, "Stars make you invincible?". During the Mario Kart series, Stars give the character invincibility for a short time. Any item that hits the character using the star will be destroyed.

Stars appear in the Super Smash Bros. series as well. If a player touches a Star, they become invincible, allowing them to attack the foe, without worrying about damage. However, unlike the actual Mario games, the player is not able to hurt them just by touching them.

Starmans reappear in Paper Mario: Sticker Star on only three levels: Whammino Mountain, Rustle Burrow, and Gauntlet Pond. Their purpose in this game is much like in Super Mario RPG: Legend of the Seven Stars as Mario turns invincible and runs though enemies without the need to battle them.

A Starman is a rare item in the Mario Kart series. When the player is behind in a race, this item may appear, granting temporary invincibility. The player's speed will also increase helping them catch up with other drivers. If the player makes impact with another kart the player being hit will be knocked over. While the Starman is a useful item, it is usually only given to characters who are in sixth place and below when they contact the item box.

In Mario Kart: Double Dash!!, the rear character will be knocked off the kart and will drag on the ground. Upbeat music will play as the player uses it, and their kart will flash rainbow (or yellow if in Double Dash!!).

Storing the Star can be a good defensive tactic as well, firing it off when incoming shells and POW blocks are on the verge of impact. The Star's speed boost makes it a viable means of reaching off-road ramps and shortcuts too though. See the Circuit Guide later on for specific locations of these. 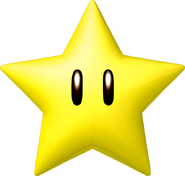 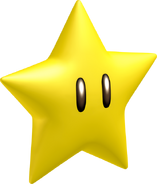 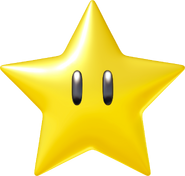