This game series mainly involved mostly Nintendo-related characters mainly those from the Mario, Kirby, The Legend of Zelda, and Pokemon series fighting it out in battle. For Single-player mode, there is usually three modes that are playable: Classic Mode, Adventure Mode (Melee and Brawl only), and All-Star Mode (Melee, Brawl, and Smash 4). The more popular Battle Mode is a multiplayer mode where everyone can join in on the fight. Also note that certain characters must be unlocked by special ways in order to play as them. Only in Super Smash Bros. Brawl where one can play the Subspace Emissary in order to unlock every character in that game. Also, Mega Man, the Villager, Rosalina and Luma, Duck Hunt, Greninja, Lucina, Palutena, Bowser Jr., the Wii Fit Trainer, and more are new additions to Super Smash Bros. for Nintendo 3DS and Wii U. The Inklings from the Splatoon series are new additions to Super Smash Bros. Ultimate for the Nintendo Switch. Mario, Luigi, Donkey Kong, Kirby, Yoshi, Pikachu, Jigglypuff, Link, Fox, Samus Aran, Captain Falcon, and Ness are the only characters to have appeared in every Super Smash Bros. game so far who are often referred to as "The Original 12." 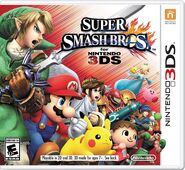 Super Smash Bros. for Wii U.