MarioWiki
Register
Don't have an account?
Sign In
Advertisement
in: Items, Pages with section stubs, Power-ups,
and 38 more
English

Makes the user larger
Grants ability to break Brick Blocks.
Boosts the user's racing speed in the Mario Kart video games.
The Mushroom is a very common power-up (possibly the most common power-up) from the Super Mario series of video games. Traditionally, it is about the size of "regular" Mario, and has a white stalk below a red and white (originally red and orange) spotted cap. Originally, it was shaped after a common mushroom, but since Super Mario Bros. 2, it gained a more cartoon-ish shape, with an almost-spherical cap and a stubby stalk. It has two eyes like most other power-ups.

These mushrooms were originally going to be called Magic Mushrooms. However, they decided that this was not such a good idea after all, since "Magic Mushroom" is the street name for the Psilocybin mushroom, a type of hallucinogenic drug.

Shigeru Miyamoto stated in an interview that the Super Mushroom was created by chance. The first sketches of Mario turned out to be too big, for which they were forced to shrink them. Then the development team thought it would be interesting to have Mario grow and shrink by eating a magic mushroom, like in Alice In Wonderland, where she ate a mushroom to make her grow after poison shrinks her. The mushrooms themselves were inspired by their association with magical worlds.[1]

It first appeared in Super Mario Bros. for the NES/Famicom, and the powers it grants the player lent itself to the game's title. (In Super Mario Bros. only, these mushrooms were called "Magic Mushrooms".) It emerges from flashing blocks marked with a '?' when they are bumped from below (a convention carried over from Mario Bros., where bumping platforms was the main form of attack). Upon emerging, it then begins to slide to the right (this was later changed for Super Mario Bros. 3, where, depending on what side of the block was hit, the mushroom would head toward the opposite side). If the player touches it, "regular" Mario becomes Super Mario (which, in NSMB, has been finally proven to be his normal size): he doubles in size and is able to take an extra hit. Furthermore, Super Mario can break bricks by jumping into them from below or (in games with that move) Ground Pounding into them from above, whereas regular Mario can't. If Super Mario comes across a Super Mushroom, the game will (in most cases) instead give a secondary item (dependent upon the game and the block that was hit), such as a Fire Flower, Super Leaf, or Cape Feather. These allow him to gain better powers, such as the ability to shoot bouncing fireballs as Fire Mario and the ability to fly and glide as Caped Mario. In Super Mario World, Super Mushrooms would also allow Mario to break Spin Blocks with the spin jump, an important tool for certain levels.

The Mushroom makes a return to the New Super Mario Bros. games, having the same abilities as the previous games.

In some Mario games, the Mushroom heals Mario and friends, such as in Super Mario RPG: Legend of the Seven Stars, the Paper Mario series, and the Mario & Luigi series.

Mushrooms are basic items that heal HP. These items can be purchased at almost every item shop in the games. In the games, there are four types of Mushrooms are available: Normal, Super, Ultra, and Max.

In Super Mario 64 DS, the mushrooms have the qualities of a Mega Mushroom. They can turn a player big and they can then crush enemies or destroy boulders or balls, and earn one ups when they reach the number eight, though it lasts only for a short amount of time. They can be found in Brick Blocks or Stakes in Bob-omb Battlefield, Whomp's Fortress, Hazy Maze Cave, Tall, Tall Mountain, and Tiny-Huge Island.

Using a Mushroom in Mario Kart gives the racer a powerful boost of speed to make them drive incredibly fast for a limited time (enough for them to skip off-road surfaces and making shortcuts at certain tracks). The Mushroom Cup's logo is also a Super Mushroom. Mushrooms can be found in singles or triples, and as of Mario Kart: Double Dash!!, a racer can drop his or her Mushroom on the road if they're attacked using an item. These mushrooms can be picked up by driving through them, which causes them to be used automatically.

A variation of the normal Mushroom is the Golden Mushroom, which first appeared in Mario Kart 64. It is far more powerful than the Super Mushroom, and can be used multiple times until it wears off.

An alternative to the Mushroom is the Mini-Turbo, which can be achieved by powersliding and performing a special technique that follows the powerslide. The technique varies from game to game, ranging from sliding for a continuous time to turning left and right alternately to holding the powerslide for a longer time. Mini-Turbos, however, gives a much shorter boost, and cannot be used to skip off-road surfaces.

Mushrooms have played a big role in the Mario Party series. They appear in various mini-games, such as Toadstool Titan, though its main role is as an item with numerous variations (such as the Golden Mushroom, Poison Mushroom, and Reverse Mushroom).

The Mushroom makes a cameo in Nintendogs as an item in the category "Sports" named "Rubber Mushroom" in the Super Mario Bros. style (yellow cap with red spots and white stalk), and Nintendogs + cats, but with white dots on a purple cap. The stalk is still white.

It also appears in Animal Crossing Wild World, as a gift from Nintendo on WiFi day.

It also makes a cameo in World of Warcraft as a picture of a mushroom with a red and white cap and eye-like slits that represents some items. The super mushroom (as well as the "1-up mushroom" and the "Mini Mushroom" can be found in candy form.)

The game Terraria features mushrooms with the same color scheme as the original Super Mario Bros. mushroom, which restore a portion of the player's health.

The Mushroom also makes a cameo appearance in the 2012 Disney Animated film, Wreck-It Ralph where Ralph digs up the power-up for a couple of seconds at Tapper's bar. 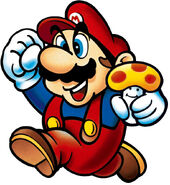