While its predecessor was similar to the original Super Mario Bros., Super Mario Land 2 has more in common with later games (specifically Super Mario World): the player may now scroll the screen to the left, levels are not linear by virtue of a map screen that allows the player to choose a level (from Super Mario Bros. 3 and Super Mario World), and the game has battery backup saves. Hidden levels have been added too, another element unavailable in the first game. In addition, the game keeps track of how many enemies the player has defeated. (by jumping on them, hitting them with a fireball, etc.).

Super Mario Land 2 consists of six themed zones, each culminating with a boss, who possesses a golden coin. There are also four levels that are independent of any zones. The zones are, working clockwise around the map:

When a golden coin is obtained, its respective level is still available to play. However, the boss won't show up unless a certain Game Genie code is activated.

The game contains three mini-games. In one mini-game you play a game of Skill Crane which you lower a claw over a moving conveyor belt that contains items. The other mini-game requires you to stop a pair of mice that will gnaw through paths to various prizes. Stopping them in the correct position will leave the path to the better items open. This mini-game could be the predecessor to a mini-game in Mario Party called "Pipe Maze" and a similar mini-game in Super Mario 64 DS. The third mini-game is a slot machine that requires coins to play. Winning can gain you either more coins or more lives.

The game has two levels of difficulty, the default being normal mode. Pressing Select at the file select screen displays the words "EASY MODE" at the top of the screen, which reduces the number of enemies encountered in the game and introduces some other minor changes to levels, such as widening the crumbling skull bridges found in the final level, and slowing down the enemy bubbles.

Each subsequent Mario game tends to introduce a new power-up, and Super Mario Land 2 is no exception. While the traditional Super Mushroom, Fire Flower, and Invincible Star from the console games are still present, there are newer power-ups for this handheld edition:

Super Mario Land 2 takes place immediately after the original Super Mario Land. Wario has put an evil spell over Mario Land while Mario was away in Sarasaland, renaming the area Warioland. The inhabitants are now brainwashed into thinking that Wario is their master, and Mario is their enemy. Wario's motive behind this sudden attack was to take control of Mario's castle in order to have a palace of his own. To stop Wario, Mario must find the 6 Golden Coins guarded by the Bosses throughout Mario Land to gain access to his castle. Mario eventually infiltrates Wario's castle, and fights him. Mario, inside his stolen castle and defeats him, thus reclaiming his castle and freeing Mario Land from Wario's hypnotic spell. Wario becomes Tiny Wario and last seen jumping out of the castle balcony. It is unknown what happened to Mario Land after because it has never been featured in any other Mario Game, except Wario Land: Super Mario Land 3.

Just like in Super Mario World, most of the music in Super Mario Land 2 is a variation on the same theme. The game shares a tradition of many games whose music is composed by Kazumi Totaka and includes Totaka's trademark track, Totaka's Song. It is a hidden clip which has been found in many games which he has worked on. In this game it can be found at the game over screen when the game is left running for 2 minutes and 30 seconds. The theme song was sampled by the music group Ambassadors of Funk for their song Six Golden Coins. This song was included on the album Super Mario Compact Disco. 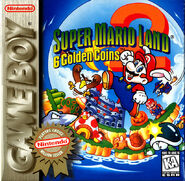 Bomb Mario next to a save file.
Add a photo to this gallery
Retrieved from "https://mario.fandom.com/wiki/Super_Mario_Land_2:_6_Golden_Coins?oldid=273191"
Community content is available under CC-BY-SA unless otherwise noted.