Super Mario Kart (Japanese: スーパーマリオカートSūpā Mario Kāto) is the first installment of the Mario Kart series. It was released in August 27, 1992 for the Super Nintendo Entertainment System. Players race motorized go-karts as one of eight characters from the Super Mario series. It features advanced graphics for the time thanks to its use of Mode 7 texture mapping. This and Mario Kart 8 Deluxe were the only Mario Kart games where the Cape Feather appears and the only Mario Kart game where Donkey Kong, Wario, Spiny Shell, Triple Mushroom, Triple Green Shells, Triple Red Shells, and Bob-ombs do not appear.

The game's success spawned the hugely influential Mario Kart series, while also helping to pioneer the kart-racing genre. The game's success has also influenced the greater Mario franchise, with elements from it appearing throughout it. Examples of these kinds of elements include a level designed after Super Mario Kart's courses appearing in Super Mario 3D World as well as Rainbow Road making an appearance in Paper Mario: Color Splash. Super Mario Kart's use of a wider cast of characters such as Bowser and Peach was the first of many multiplayer-oriented Mario spin-off titles that included a diverse, playable cast of Mario characters such as those from the Mario Tennis and Mario Party series. Additionally, the game has been ranked as one of the greatest games of all time by various organizations due to its aformentioned legacy and its ground-breaking gameplay.

Super Mario Kart can be played by one or two players. All gameplay uses a split screen view. In single player mode, the top displays the course, while the bottom screen can either display a rear--iew mirror perspective, or an overhead view of the whole track, displaying where all the racers are currently. In multiplayer, the bottom screen is assigned to the second player's view. The gameplay is kind of slippery.

The first single player mode is Grand Prix, in which one player races seven computer-controlled drivers. Engine classes of 50cc, 100cc, and 150cc are available (150cc is available upon acquiring gold in all the cups in 100cc). Mario and Luigi are average in all the stats. Bowser and Donkey Kong have the highest top speed and weight, but the lowest acceleration and handling. Toad and Koopa Troopa have the highest handling, but lowest weight. Peach and Yoshi have the worst speed, but the best acceleration. There are four cups to select: the Mushroom, Flower, Star, and Special Cups (100cc and 150cc only). Each cup consists of five tracks and the player must receive fourth place or better to advance to the next track. Places five through eight are given the "ranked out" title. The second mode is Time Trial, in which the player races through one track in an attempt to set a record for best lap time or course time.

The first multiplayer mode is Grand Prix, which plays just like the single player version, but with one less computer-controlled driver. In order to proceed to the next track only one player is required to rank in the top four. The second mode is Match Race, which is a one-on-one race on any track. In Battle Mode, two players choose from four levels specially designed for battle mode and try to pop the three balloons surrounding the other player with items such as Koopa shells or banana peels. The last player with balloons wins.

In Grand Prix and Match Race modes racers can collect Coins which affect top speed and acceleration. In all modes, Lakitu rescues drivers who have driven off the track.

There are eight playable drivers. These can be classified into four types based on top speed, handling, strength and acceleration.

However, some other characters from the series acts as obstacles in the game's tracks, like Thwomps, Gophers, Piranha Plants, and Flopping Cheep Cheeps. Ghosts do not act as enemies, but both as item and as part of the Ghost Valley tracks' background. Yoshi, Bowser, and Donkey Kong Jr. are the only drivers in this game to have their own taunts when surpassing other racers regardless if they are being used by the player or CPU. The others do not have their own taunts and instead the standard beep is heard when surpassing other racers, but can only be heard when used by the player.

As stated in the game's manual, Lakitu is the owner of all the racetracks, thus overseeing all races. He appears on the track to start the race, to warn the player if they are going the wrong way on the course, and when they fall off the edge of the track or go out of bounds. If the latter happens, Lakitu transports the racer back onto the course at the price of two Coins. A Cheep Cheep balloon distributes the trophy to the GP winner.

Note: All tracks use five laps. 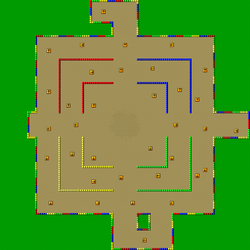 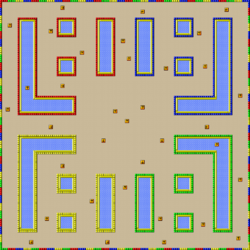 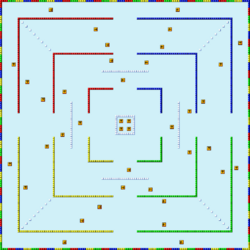 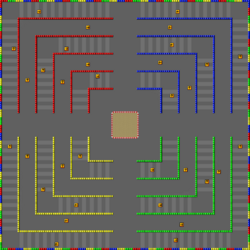 The four battle courses. Click on each one to visit the corresponding article.

Super Mario Kart can be found in Wii Shop Channel (a channel preinstalled into the Wii that is for buying games from older consoles or from a special service called WiiWare) for 800 points (1,000 points costs $10.00 using MasterCard or Visa). The game is compatible with a Nintendo GameCube Controller or a Classic Controller (both sold separately). The game is exactly the same as the original, and one of the only very noticeable changes is the controller used to play it.