Super Mario 64 DS (スーパーマリオ64DS, Super Mario 64 DS) is a 2004 game from the Super Mario series for the handheld game system Nintendo DS. It is also a launch title for the console. The game is an enhanced remake of the 1996 game Super Mario 64 for the Nintendo 64 console, retaining the original story with slight changes. New features include a wireless multi-player VS. Mode where up to four players can play locally, this does not work on the Wii U and Virtual Console versions of the game, (excluding the single-player training mode). There's lots of minigames (most of them return in New Super Mario Bros.), as well as new levels and bosses. The dialogue has changed quite a bit, and Mario is not the only playable character (nor is he even available from the start). Yoshi, Luigi, and Wario also join the adventure and there are 150 Power Stars to collect (30 more than in the original game). This is the first Mario game on the Nintendo DS.

Peach sends Mario a letter so that he may come to the castle as she baked him a piece of cake. Then, a Lakitu Bro. flies around Peach's Castle giving the player a view of the terrain along with Yoshi sleeping on the roof Suddenly, a pipe comes up from the ground and out jumps Mario. Mario turns around and two more pipes rise up, holding Luigi and Wario inside as they somehow managed to read the letter as well. When Luigi accidentally caused a fight, they fight for a while until all three bump into each other. Then, both Mario and Luigi look at Wario who points to the castle. Then, they go to the castle for the cake.

Later on, the Lakitu Bro. takes Yoshi off the castle and onto the ground. He then wakes Yoshi up and shows his concern to him that Mario has not yet returned and that he should go check to see where he is.

As Yoshi tries to enter the castle, the Lakitu Bro. told him that the doors are locked. He tells Yoshi that he saw a Rabbit holding the key to opening the door. Yoshi then goes along, chases the rabbit in the maze and collects the key from him once the Rabbit is caught.

According to the Toad in the foyer, Mario, Luigi, and Wario all went to Bob-omb Battlefield to collect Power Stars after hearing that Peach was recently again kidnapped by Bowser. Goomboss, King Boo, and Chief Chilly then were all sent out to capture the three Bros. The Goomboss held Mario, King Boo held Luigi and Chief Chilly held Wario. Now it's up to Yoshi to find the power stars and rescue them, which he eventually does, then they battle Bowser twice. After collecting 80 Power Stars, Mario can battle Bowser one last time. Then the four land in front of castle rescuing Peach and a cake and the credits roll.

Gameplay of Super Mario 64 DS is fairly similar to the original Nintendo 64 version of the game. Mario (and now Luigi, Wario, and Yoshi) jump through a series of paintings and walls to gather stars to defeat Bowser and his minions.

The game features worlds which the player can access by jumping through paintings in different rooms inside the castle. Each world has seven Power Stars (there were six in the original Nintendo 64 version of the game) as well as an extra 100 Coin Star for each level, which appears above you once you collect 100 Coins without exiting the level or collecting a different Star. There are a total of 150 Power Stars in the game to be collected (there were only 120 Stars in the original game).

To complete the game fully, the player needs to find the three plumbers who were flung behind the doors by Bowser. The following table below shows each character attributes in a certain statistic. Each has their own special abilities:

Unlike in the original game, there are no Wing, Vanish, and Metal caps. They instead are replaced with Power Flowers. Every character reacts to the Power Flower differently. There is also a "Wings" power-up which can only be used by Mario and is a replacement to the wing cap, it replaces the Power Flower in some stages while playing as Mario. Additionally, all of the ! blocks (but the yellow one) have been replaced with a red ? block, which is activated through the ? switch where what would be in the original game the Tower of the Wing Cap. The other two switches are gone, and their areas instead contain extra Power Stars.

Mini-games are also a part of Super Mario 64 DS. More mini-games can be unlocked by catching the Rabbits. The player can play up to 36 mini-games in the Rec. Room.

Super Mario 64 DS also includes a multi-player VS. Mode, which can be played up to four players by using the wireless communication. The host player must press the orange icon labeled "VS.", while the other players must press DS Download Play on the main menu. To change the settings, the player can press the start and select buttons. When the DS systems are connected, the host player will select a stage. There are 4 stages in total: Castle Grounds, Sunshine Isles, The Princess's Secret Slide, and Battle Fort. Once the stage has been selected and the settings are changed, each player will compete to get the most Power Stars and Coins withing the time limit. After the round is finished, the results will show the ranks of the players with the most Stars and Coins. All players in this mode play as a Yoshi. The first player (the host) plays as the default Green Yoshi, the second player plays as a Red Yoshi, the third player plays as a Blue Yoshi, and the fourth player plays as a Yellow Yoshi. Despite the color differences, each Yoshi has identical abilities, and are all able to pick up the caps of Mario, Luigi, and Wario to use the abilities of those characters. Also, all the characters can fly, whereas in the main game, only Mario can fly. VS. Mode can also be used to practice alone. This is useful to know where all the Stars, Coins, and caps are. 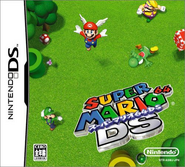 The logo for Super Mario 64 DS. 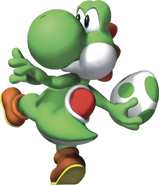 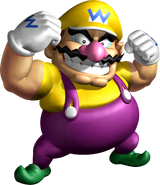 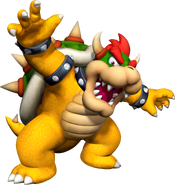 All the four playable characters together.