MarioWiki
Register
Don't have an account?
Sign In
Advertisement
in: Items, Power-ups, Items in Super Mario Bros. 3,
and 6 more
English

Super Mario: Transforms Mario into Raccoon Mario or Tanooki Mario (Super Mario 3D Land)
Mario Kart 7: Grows a tail behind the kart that flips over any racers near the user.
The Super Leaf is a power-up that appears in the Mario series as a recurring item that grants the player to ability to fly.

In Super Mario Bros. 3, when Mario equips the Super Leaf, Mario can fly and attack enemies with his tail. This tail attack is one of the only ways to defeat certain enemies, such as the Fire Chomp. The attack itself is triggered by pressing the B button and Mario spins around for a second and damages the enemy directly beside him. The attack is useful if you might be afraid of falling to your death because Mario can use this powerful attack even if he is midair, unfortunately this would automatically make you start to fall if you were flying. When midair, the leaf's attack slows Mario's fall time, so long as you repeatedly use the attack. Oddly, there is another item that could make Mario use this attack: That item is the Tanooki Suit. One weakness to the Super Leaf is that it is completely useless in water level as you can't fly nor use the tail attack while under water. This was fix in New Super Mario Bros. 2 which then allows Mario to do the attack while under water.

While running as Raccoon Mario, you can actually obtain the ability to fly. You may have noticed, if you are playing Super Mario Bros. 3, that there is a small bar at the stats menu at the bottom of the screen. It is used to measure your speed. When the bar goes to the very top, it makes a loud ringing sound. This is the moment Mario can fly. Press the jump button and Mario will start flying into the sky. To keep Mario in flight, repeatedly press the jump button. There is another item that also is capable of flight and that item is the P-Wing.

As with any other power-up in Super Mario Bros. 3, transforming into Raccoon Mario allows him to take an extra hit from an enemy. However, this is at the cost of the transformation.

The Super Leaf reappears in Super Mario 3D Land and is grown on the Tail Tree, which is a tree located in front of Peach's Castle. During the events of Super Mario 3D Land, a powerful and violent storm blows off all the Super Leaves and are spread throughout the land. Bowser gives most of his minions the power of the super Leaves so that they could have a greater chance of defeating Mario. False Bowsers in this game are also produced by Super Leaves, a Goomba, and magic.

It has the same abilities as it did in Super Mario Bros 3. Except for now, there is a similar power-up called Invincibility Leaf and you can finally use the tail attack under water.

In the Mario Kart series, the Super Leaf is a power-up that gives the kart a Tanooki Tail and the ability to deflect other objects and knock over other karts. It has black eyes with white pupils, as seen in the Item Box and is brown with large light brown stripes. It also appears to have a small hole in the top left corner. The Super Leaf is also used as the Leaf Cup's logo. 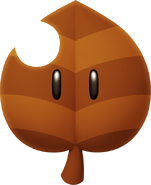 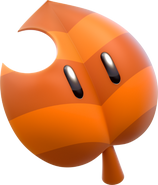