Sunshine Airport is the first course of the Star Cup in Mario Kart 8. Like most Mario Kart tracks it has 3 laps.

Sunshine Airport is an airport that is based on the GameCube game: Super Mario Sunshine. The race starts in an airport lobby, with Piantas from the game waving near the track. After driving out of the airport, there are several crates as obstacles, and then a parked airplane in front of you, which you can either drive underneath, or drive through after going up a ramp. After that, the track curves with Anti-gravity, ending in a ramp where your glider comes out. You fly down over the ocean and land on the track outside the airport building, and drive into the building to complete the lap.

Mario in player point of view

Galaxy air and the airport itself

Luigi as he is very close to the airport 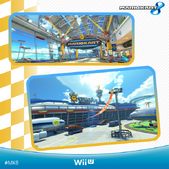 Mario as he is under a plane
Add a photo to this gallery
Retrieved from "https://mario.fandom.com/wiki/Sunshine_Airport?oldid=260988"
Community content is available under CC-BY-SA unless otherwise noted.