Female (Referred to as Male in the Mario & Luigi: Dream Team Prima Guide)

Save the Mushroom Kingdom
Starlow (known as Chippy by Bowser) is a recurring character who appears in the Mario & Luigi series, making her debut appearance in the game Mario & Luigi: Bowser's Inside Story as a Star Sprite who helps Mario and Luigi by giving tips and carrying items, as well as possessing special powers. She has a very similar role and personality to Stuffwell from the previous game Mario & Luigi: Partners in Time, and her name is a portmanteau of "star" and "yellow." She has appeared in three games so far. Starlow appears as a yellow ball that appears to have two brown feet, a face similar to that of Kirby and a pale-yellow star on top.

Starlow has a very upbeat personality, since she always seems to be in a good mood. However, she mainly gets annoyed whenever Bowser is acting pushy, or when Luigi is acting scared and cowardly. She is also very sarcastic.

Starlow first appeared in Mario & Luigi: Bowser's Inside Story, where she is sent to the meeting of Princess Peach's Castle as a representative of the Star Sprites to discuss the recent case of Blorbs (although the castle's huge size made her late). She believes that the cause is from the residents consuming Blorb Mushrooms sold by a man in a cloak. Unfortunately, the group is encountered by Bowser, who is defeated by Mario after being weakened by the powers of Starlow. Starlow tells Peach to "clean up the mess", and they fling Bowser out of this castle together.

Later, she is inhaled into Bowser along with Mario, Luigi, Princess Peach, Toadsworth, and Toadbert after he eats a "Lucky Shroom" that gives him a vacuum ability. When Mario finds her in Bowser's body, she is trapped inside an amoeba who is holding her inside, remarking about how severely she is being tickled until she is freed. Starlow thanks Mario, and joins him and Luigi for the remainder of the game, serving the same purpose as Stuffwell from Mario & Luigi: Partners in Time: helping Mario and Luigi by holding their items and equipment. Additionally, unlike Starlow, she has a demo version of all the abilities learned throughout the game. Later on, when the trio recovers Bowser, she uses a different name, Chippy, not wanting Bowser to know she is helping the Mario brothers. Starlow also serves a respectful use in some battles such as Bowser, the Dark Star and the Dark Star Core by allowing Mario and Luigi to jump onto her legs so that she can fly to the top screen, avoiding enemy attacks from below.

At the end of the game, when Starlow and the other characters are ejected out of Bowser's body, Bowser almost immediately recognizes her voice as "Chippy" and gets furious, deciding to engage a fight with her and the two brothers. When Bowser and Peach's castles are remodeled, Starlow and Birdley deliver a present to an injured Bowser as thanks for all he did, they have a long chat, resulting in Starlow insulting him and Bowser demanding she gets out, which she does.

Starlow makes her second appearance in Mario & Luigi: Dream Team, having the same role as the previous game. This time, Starlow says she has been invited to represent the Star Spites on a visit to Pi'illo Island. Starlow helps Mario and Luigi in the later aspects of battles, accessories and other important things inside the game.

This time around, she serves another purpose rather than just keep Mario and Luigi's supplies safe. She is in charge of taking care of Luigi when he is asleep and also makes numerous amount of changes to happen in the dream world in order to help Mario when he is inside of it.

Here she serves the same purpose she does in the last games. She accompanies the trio during the entire game and provides them with tips and bits of advice. In contrast with the last games she has been in, Starlow doesn't have any other purpose in this one rather than being the group's guide and doing the talking.

She appears in Bowser's Minions, where she competes in a cutie battle contest hosted by Wendy. 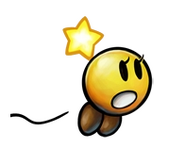