The Standard LG is a kart in Mario Kart DS. This is one of three karts Luigi has, the others being Streamliner and Poltergust 4000.

The Standard LG is the same style as Mario's Standard MR, but is colored green, has different stats and the emblem is Luigi's signature green "L", unless the player has their own personal emblem enabled.

During races, the CPU controlled Luigi may pick this kart to race with more frequently than his other karts.

As mentioned above, the Standard LG has different stats from Mario's Standard LG. It has improved speed, acceleration and handling, but has weaker drift. In terms of hidden stats, it has improved off-road and Mini-Turbo. However most of its stats are weaker than Luigi's Poltergust 4000.

Also, just like with all other characters' Standard Karts, Luigi's Standard LG has different stats in Battle Mode. 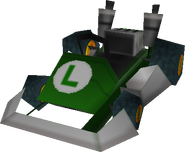 Data-rendered model of the Standard LG.

Luigi in his Standard LG racing on Desert Hills.
Add a photo to this gallery

Retrieved from "https://mario.fandom.com/wiki/Standard_LG?oldid=297315"
Community content is available under CC-BY-SA unless otherwise noted.