Spiny Eggs are spiked balls launched by Lakitu. They're small and are usually red. Upon landing, it will become a Spiny. Its title is deceptive, as it isn't an egg. It's nothing but a Spiny curled into a ball. Like a Spiny, a Spiny Egg is vulnerable only to fire and Starman, making it a bit of a nuisance.

In New Super Mario Bros., it's revealed that a Spiny will curl back into a Spiny Egg when water touches it. In Super Mario Bros. 3, Green Spiny Eggs were introduced. They never hatch, and they do nothing but roll around on the ground.

They've also been referred to as pipes, possibly due to the existence of Sky-Blue Pipes (the Sky-Blue Spinies response to the Spiny Eggs).

Spiny Eggs made a brief cameo in The Super Mario Bros. Super Show!. However, here, they were all pink.

The Adventures of Super Mario Bros. 3

In The Adventures of Super Mario Bros. 3, Lakitu launched a single green spiny egg. This made a small explosion upon contact with the ground, and it turned back into a normal spiny. 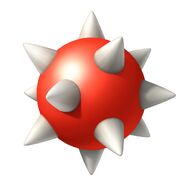 A red Spiky Egg as it appears in New Super Mario Bros. Wii.

Attention MarioWiki users!: This article is too small or lacks sufficient information. Whether you are commenting or editing, we would be pleased if you help MarioWiki by expanding it.
Retrieved from "https://mario.fandom.com/wiki/Spiny_Egg?oldid=273113"
Community content is available under CC-BY-SA unless otherwise noted.