Spindrifts bounce anyone who jumps on their head into the air. Afterward, that character will float down while spinning. Spindrifts can be defeated.

Spindrifts are based off flowers. They have a spinning flower on their heads which allows them to hover around. They also have a yellow cone at the bottom of their heads. A green leaf-like cape tops the first half of the yellow cone. A Spindrift's head is just a white sphere with two eyes and a small mouth. In the remake their heads now have a peach-yellow color, their flowers on their heads are somewhat bigger, their mouths and eyes are smaller and their mouths are now colored black instead of red. They can also hover above water in the DS version. 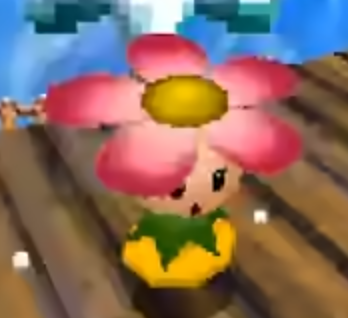 Retrieved from "https://mario.fandom.com/wiki/Spindrift?oldid=293464"
Community content is available under CC-BY-SA unless otherwise noted.