Not to be confused with the enemy Spike.

Spikes are hazards that appear in certain Mario games. They are usually found on ceilings which most actually come down and attempt to crush Mario. Some Spikes can instantly defeat Mario on contact. Spikes are very common in castle-related levels more famously Bowser's Castle. Spikes are also as weapons and defensive object by enemies such as Spike Tops and Spiked Goombas.

Spikes are usually seen in castle levels in this game. They have a much longer design in which they attempt to skewer Mario on contact.

Spikes are mostly seen on the ceiling in this game. In some castle levels, some Spikes fall from the ceiling themselves, while others attempt to crush Mario, instantly defeating him.

Spikes are very common in this game, mainly appearing in castle levels and near the end of the game. Whenever Yoshi touches one, he loses Baby Mario, and at most times, can be very difficult to regain.

Spikes are mainly used as a trap in the Paper Mario games. Whenever Mario touches one, he gets sent back to before he crossed the spikes and takes one point of damage. Spikes are greatly used in Paper Mario: The Thousand-Year Door, where the most infamous one is the crushing ceiling in Hooktail Castle. In the Pirate Grotto, Mario can avoid spikes using the Paper Thinness or Paper Tube abilities. Spikes also appear in the Palace of Shadow. There is also a room full of spikes, which Mario must use Vivian's Veil move in order to avoid them. His reward is the Spike Shield badge.

Spikes only appear in castle levels in the New Super Mario Bros. games. There are also new obstacles known as Spiked Balls which they can stay around and attempt to ram into Mario.

Spikes are usually seen in certain areas in the Mario & Luigi games. If Mario or Luigi lands on some spikes, they are usually sent back to the area before. 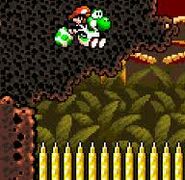 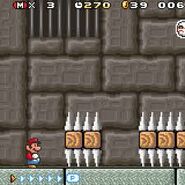 Spikes in Mario & Luigi: Dream Team.
Add a photo to this gallery
Retrieved from "https://mario.fandom.com/wiki/Spike_(hazard)?oldid=257426"
Community content is available under CC-BY-SA unless otherwise noted.