Spikes are enemies first appearing in Super Mario Bros. 3, they commonly attack by pulling spiked balls out of their mouths and rolling them at Mario or Luigi; . Like Lakitu, they appear to have unlimited amounts of ammo. Also, Spikes' stomachs can be used to store other things as well. Since their debut, Spikes have been recurring enemies in the Mario series and several are loyal allies of Bowser. Spikes usually toss their spiked balls down hills requiring the plumbers to hop over them (in a similar fashion to Donkey Kong) once reached, they can be defeated with either a stomp, or basically any other attack. In more recent games, Spikes can also toss other projectiles too. Spikes have since appeared in Super Princess Peach, New Super Mario Bros. Wii, and several other games.

Spikes first appeared in Super Mario Bros. 3 as enemies. They are found in the Water Land and Ice Land stages, and they attack by pulling spiked balls out of their stomachs and throwing them at Mario or Luigi. Despite their appearance, Spikes can be stomped even when they are holding their spiked balls above their heads. They can also be defeated with the effects of the Fire Flower, Starman, Super Leaf, Hammer Suit, or Tanooki Suit.

Although no regular Spikes appear in New Super Mario Bros., an icy variety of Spike called Snow Spike appears in World 5-1. Instead of throwing spiked balls, Snow Spikes throw snowballs that progressively get bigger as they roll.

Normal Spikes reappear in New Super Mario Bros. Wii, along with Stone Spikes, a blue variety that uses spiked balls made of stone thrown directly downwards from the ledges on which they stand. Spikes can be defeated by a simple jump to the head, however, unlike in Super Mario Bros. 3, if the Spike is holding a spiked ball it will damage the player. They can also be defeated by fireballs or barrels and can also be frozen via the Ice Flower or the Penguin Suit power-ups, they can be instantly killed with the effects of the Starman. In this game, Spikes stay at one spot instead of walking around, although they can turn directions. The green variation appears only in World 2. Unlike regular spiked balls which destroys blocks, the Spike's spiked balls cannot break blocks.

A sub-species of Spikes called Mace Penguins appeared in Super Mario World 2: Yoshi's Island. In this game, they were smaller than normal but are still able to create spike balls. They only are in BLIZZARD!!! but in the remake, they also appear in Endless World of Yoshis.

A type of Spike called Gabons appear in Yoshi's Story in the level Jungle Hut on Page 4. They regurgitate spiked balls and roll them down hills. The Yoshis may eat them, but the Green Yoshi likes them best.

According to the text seen after beating the level, the Baby Yoshis apparently met one specific Spike named "Gabon" while entering his hut. All that is known about the encounter is that the angered Spike threw various objects at the Baby Yoshis. Additionally, the boss Don Bongo bears some resemblance to a Spike.

Spikes also appear in Super Princess Peach, which also introduces the orange haired, enraged Mad Spike. They can be found in several areas such as Fury Volcano and they attack by tossing spike balls at Peach. They can be defeated by whacking them with Perry or with any other attack, stomps can knock them over to be tossed at other enemies or items.

A giant Spike appears as a boss in Mario Party 9. It is the mid boss of the Magma Mine board, while the stage boss is Chain Chomp. The minigame it is fought in is Spike Strike. During the minigame, the Spike attacks the players by spitting spiked balls onto the paths leading to them. The players must attack it by quickly choosing a hammer to smack the spiked balls back at him. If players end up selecting a stick, they will end up being hit by the spiked balls.

In Mario Party: Island Tour, a Spike is one of the possible tiles to appear in Match Faker. Stone Spikes appear in Mad Ladders.

Spike appears in Super Mario Party as a non-playable NPC in the Megafruit Paradise board.

Spikes appear as nonplayable characters in Mario Party: Star Rush, appearing as NPCs in the minigame, Roller Revenge. Here, they throw spiked rollers at players, and players who are hit by the rollers lose a life. When the minigame is over, Spike does his second place animation from Mario Party 10.

Although no regular Spikes appear in Paper Mario, Paper Mario: The Thousand-Year Door or Super Paper Mario, Clubbas, a variation of Spikes that use maces as weapons and are often seen sleeping, appear instead.

Spikes make their Paper Mario debut in Paper Mario: Sticker Star. They only appear within the levels of World 2. They also have a lot of HP and they have the same HP yellow Pokeys and Snifits have (16). Spikes also fight in groups of two later and are aided by Paragoombas, Paratroopas, Swoopers and Hammer Bros. Spikes will chase Mario and throw their spiked balls instead of tossing them slightly and letting it roll. In battle, Spikes can hold a spike ball over their heads, making jump attacks ineffective until they throw the ball on their next turn. Spikes can also Ground Pound Mario but if the attack misses, it will bounce to the left. When defeated they occasionally drop a Spike Ball sticker. Snow Spikes from New Super Mario Bros. also appear in this game and sometimes drop a Snowball sticker. If a Spiked ball is touched outside battle from a Spike, Mario loses 2 Heart Points.

Spikes return in Paper Mario: Color Splash with the same appearance and behavior from the previous game. However, they don't hold the Spiked Balls during the entire battle this time around, but only when they attack. Also, the design of the spiked balls has changed, since the spikes were brown in Paper Mario: Sticker Star and are now white. Spikes appear in Kiwano Temple, The Golden Coliseum, and Sunset Express. Two Spikes assist Ludwig von Koopa in battle, and their Spiked Balls must be hit back at them as Raccoon Mario to defeat them. One appears as a member of the Shady Sledge Bro's gang in Dark Bloo Inn, and one also appears as an NPC on the Sunset Express.

Spikes appear in Mario Golf: World Tour as NPC characters in the Castle Club game mode. Their name can also appear on the tournament scoreboard. A Giant Spike also appears in Wiggler Park.

Spikes return in Captain Toad: Treasure Tracker as well as it's two ports acting like they did in Super Mario 3D World, although they can throw Spiked Balls as well. They appear in Windup Stairs, Seesaw Sizzle, Retro Ramp-Up, and Trick-Track Hall.

Spikes appear in Mario & Luigi: Paper Jam as enemies in Doop Doop Dunes and reside with their paper counterparts, Pokeys and Spinies.

Spikes, alongside Stone Spikes, make their playable debut in a Mario sports game as selectable teammates in Mario Sports Superstars, in the soccer and baseball modes of the game. They are classified as power type characters. They also appear as bosses in the Road to Superstar mode.

Spikes return in Super Mario Run, though they only appear in the level Land of Spikes. They throw spiked balls like in previous games, except at slightly faster intervals. 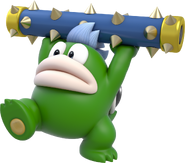 A Spike from Mario Party 10. 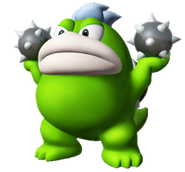