Evil
Sorbetti is the snow-covered spiked boss of Freezy Flake Galaxy in Super Mario Galaxy 2 complete with two crystals for eyes, a bulbous red nose for a weak point, an evil grin and an overall resemblance to a snow-covered Super Big Tap-Tap of Yoshi's Island DS. He appears in the mission "Sorbetti's Chilly Reception." The character laughs in a cheeky way.

Sorbetti is encountered after Mario makes his way out of the Snowstorm Maze. At first, Sorbetti is frozen inside his homeworld's moon. However, Mario agitates him by launching to Sorbetti's planet itself. An angry Sorbetti wakes up and dislodges himself from his prison, which disintegrates, and the battle begins.

Sorbetti attacks by rolling around his homeworld. Mario must smash him in the nose with his Star Spin in order to damage the boss. Sorbetti will deal decent damage if his body crushes Mario, causing the boss to laugh. Eventually, Mario is able to defeat Sorbetti with enough damage. Once his stamina is drained, Sorbetti disintegrates, and a Power Star appears in his place. 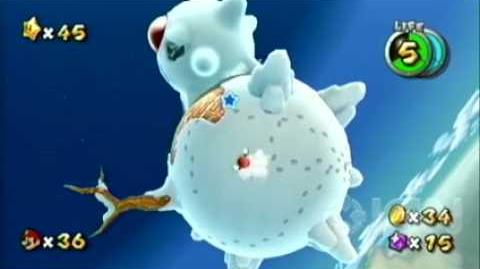 Attention MarioWiki users!: This article is too small or lacks sufficient information. Whether you are commenting or editing, we would be pleased if you help MarioWiki by expanding it.
Deutsch Español Suomi Italiano
Community content is available under CC-BY-SA unless otherwise noted.
Advertisement