MarioWiki
Register
Don't have an account?
Sign In
Advertisement
in: Articles in need of cleanup, Enemies, Shy Guys,
and 5 more
English

Snifits are Shy Guys with an extended nozzle for a mouth on their mask, which along with the dark coloration causes it to resemble a gas mask. There are many variations of Snifits.

Snifits debuted in Yume Kōjō: Doki Doki Panic and later reappeared in the Western remake Super Mario Bros. 2. They appeared alongside Shy Guys. They shoot bullets from their mouths.

In Super Mario World 2: Yoshi's Island, Snifits were rare enemies found in world 4 and 6. They were larger than the average Shy Guy, but were easily defeated by Yoshi.

They are rare enemies and exist in Hazy Maze Cave and Rainbow Ride. They were called Snufits, but this might just be a translation error. These Snifits could fly.

They were also featured as Daisy's "partner" in the story mode of Mario Party 3.

They appear mainly in World 3 of this game. One of the Snifits actually hosts a game show called Snifit or Whiffit in Stump Glade where someone has to compete in various challenges in order to win the prize. They also appear as regular enemies.

The Snifits also appear in Paper Mario: Color Splash. In addition, one of the Snifits from Snifit or Whiffit returns as the host.

Snifits show up right before the boss door in 3-4, Slime Drop Drama. They shoot bullets out of their mouths at a regular interval.

The garbageman in the 1993 Super Mario Bros. film are identified, in a single line of dialogue from Iggy, as Snifits (earlier in the movie, similarly-garbed henchmen lacking the breathing filter apparatus were likely meant to be Shy Guys, though they were not identified as such through dialogue). 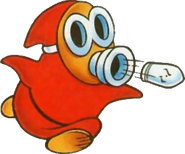 Red Snifits in the cartoon.

Blue Snifits in the cartoon.