Charging into the player

Snailicorns are large snail-like creatures that have the characteristics of a unicorn such as a large horn, hence to the name, which is a portmanteau of snail and unicorn. They only appear in New Super Mario Bros.and are never seen outside of ice stages. They are dangerous as a jump-on or ground-pound is not enough to defeat them, and Fireballs are ineffective. They can also be annoying, as they are quite large in both height and girth, and are usually found near cliff edges, and under low ceilings, so there's not much leg room for the plumbers. They are not, however, indefeasible as jumping on them sends them back a few feet, this tactic can be used to send them of a cliff nearby, but respawn if Mario leaves the area and comes back, a full-speed Shell Mario or a stray shell will knock them out or the use of a Star or a Mega Mushroom can defeat them instantly, jumping on them at the last minute is a quick and easy strategy. They only appear in World 5-3 and World 5-B.

Mario jumping over a Snailicorn 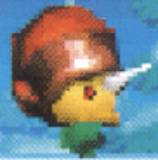 Attention MarioWiki users!: This article is too small or lacks sufficient information. Whether you are commenting or editing, we would be pleased if you help MarioWiki by expanding it.
Dansk Deutsch Español Français Norsk
Community content is available under CC-BY-SA unless otherwise noted.
Advertisement