MarioWiki
Register
Don't have an account?
Sign In
Advertisement
in: Characters, Stubs, Characters in Mario Sports Mix, Characters from the Dragon Quest series

View source
watch 01:54
Arcane: League of Legends - The Loop
Do you like this video?
Play Sound

Slime is a recurring enemy in the Dragon Quest franchise, and a playable character in Mario Sports Mix and Fortune Street for the Wii console.

Slime is a bright blue blob with mouth and eyes. It seems to be made out of a very fluid substance. There also are two different variations of Slime: She-slime, which is a bright orange slime, and Metal slime, a slime presumably made out of a metallic substance.

In the game Slime is one of the "tricky" characters, meaning it has two rather low stats and and one much better stat. Its power stat is maxed out, however, its speed is rather low and the techniue stat is at its least. To unlock Slime, the player must play 28 matches in one of the four sports. She-slime can also be unlocked by picking Slime 20 times, Metal-slime is unlocked by picking Slime 40 times in a sport.

When buying a building, the buildings color turns blue. Slime is a default character available from the start of the game and is a rather easy CPU to win against. 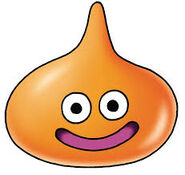 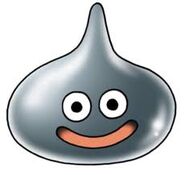 Attention MarioWiki users!: This article is too small or lacks sufficient information. Whether you are commenting or editing, we would be pleased if you help MarioWiki by expanding it.
Community content is available under CC-BY-SA unless otherwise noted.
Advertisement