Skyscraper is a Battle Stage in the game Mario Kart 64. It takes place on the top of a high tower (or skyscraper) and takes place at nighttime. In the background, there are tall towers surrounding the "skyscraper" and the moon and stars behind that. The course is tricky because there are many areas where you can fall.

This course reappears in Mario Kart Wii as a retro Battle Stage. The course is exactly the same, except the fact it was graphically updated. It also appears in a tournament on Mario Kart Channel. The course became a race track. Players had to do a time trial around the track while avoiding the Bob-omb Cars. The Wii Wheel was the only acceptable controller for this game. 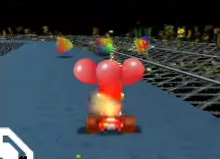 Retrieved from "https://mario.fandom.com/wiki/Skyscraper?oldid=244086"
Community content is available under CC-BY-SA unless otherwise noted.