Silver made a cameo in Green Hill Zone. Silver is a trophy too.

Silver appears in Mario & Sonic at the Olympic Winter Games as a skill type playable character. His signature move for the Wii version is Levitate and Teleport Dash for the DS. A trailer shows him and Yoshi forming a new friendhsip.

Silver makes his second playable appearance in the third installment of the Mario & Sonic series, Mario & Sonic at the London 2012 Olympic Games. He is once again, a Skill type. 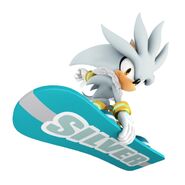 Retrieved from "https://mario.fandom.com/wiki/Silver_the_Hedgehog?oldid=257527"
Community content is available under CC-BY-SA unless otherwise noted.