Shy Guys are masked enemies seen in many Mario games, beginning with the American version of Super Mario Bros. 2, but not reappearing until Super Mario World 2: Yoshi's Island. There are several different variations of the Shy Guy that are found in an assortment of Mario games. There are various subspecies of Shy Guys as well.

Shy Guys are seen as enemies in Mario vs. Donkey Kong.

In Mario Kart DS, in DS Download, the player who chooses "Join Game" is always a Shy Guy.

In New Super Mario Bros., Shy Guys appear in only one mini-game.

Shy Guys were once going to appear in New Super Mario Bros. Wii, but they were left unused.

Shy Guy is a playable character. In challenge mode, if the player chooses Yoshi's team, he will get a team of Shy Guys.

In Mario Tennis, Shy Guy is an unlockable character who is unlockable by beating the final cup - Star Cup. Shy Guy is wearing the normal red outfit it usually wears and has a red racket with a picture of the Shy Guy's mask on it. His special ability is "Tricky."

In Mario Strikers Charged, Shy Guy is a playable sidekick. He brings a balanced approach to game, with average skills in all areas. If he gets the space, he can hitch-a-ride on a Bullet Bill and create a great scoring chance.

In Mario Kart Wii, Shy Guys are seen in the Retro Course, Shy Guy Beach on pirate ships, which fire cannonballs that explode, often flipping a player's kart over. They also appear on the sides of varies other tracks as well.

Shy Guy is a playable character in Mario Kart 7. This marks the first time that Shy Guy is playable without having to go into DS Download Play. He also has a course named after him, Shy Guy Bazaar.

Shy Guy reappears as a playable character in Mario Kart 8. Shy Guys also make an appearance in the course, Shy Guy Falls. They later have their colors made available as DLC.

Shy Guys, and their many subspecies have been appearing Mario Party games as early as the original Mario Party, mainly appearing in mini-games and on board maps. In Mario Party 4, however, Shy Guy was temporarily upgraded to host alongside Koopa, Boo, Toad, and Goomba and hosted his own board.

This is one of Shy Guy's most significant roles due to the fact he has become a playable character after beating the story mode once. In story mode he plays for Bowser so if he wins he will return the mini stars collected to Bowser resulting in the player going through the party board again.

Shy Guys appear in Paper Mario during Chapter 4: Trials in the Toy Box. They are seen causing a ruckus in Toad Town, stealing various townsfolk's items. After going to East Toad Town, Mario enters a house and must use Bow to hide himself to see Shy Guy jump through the wall. After the Shy Guy has gone, Mario must do the same by jumping through the wall.

After jumping through the wall, Mario comes in contact with a springboard and a Toy Box. Once Mario jumps on the springboard, he is transported into the Toy Box. This starts the fourth chapter in the game.

There are many sub-species of Shy Guys found in the Toy Box.

Shy Guys return in Paper Mario: Sticker Star as common enemies. Regular Shy Guys are found in Bowser's Snow Fort where most can be fought and one is running the mine cart ride. Versions of Shy Guys known as Sombrero Guys also appear in levels of World 2. They have a habit of jumping into a fight alongside another enemy. Two other Shy Guys appear in World 3 are Clip Guys and Paint Guys only in battle with other enemies. After they are successful in their respective attacks, they throw away their items and become regular Shy Guys. Spear Guys appear in World 5 and throw or stab Mario with their spears.

In Paper Mario: Color Splash, Shy Guys are common enemies. A subspecies called Slurp Guys also appear and attack Mario by sucking out his paint reserves; these ones sucked the color out of Prism Island as well.

Minion Quest: The Search for Bowser

Shy Guys are obtainable troopers of the Ranged type. Their Special Skill is Throw the Fight, and they are strong against Lakitus and Lakipeas.

The Legend of Zelda: Link's Awakening

Shy Guys appear as enemies in The Legend of Zelda: Link's Awakening under the name of Mask-Mimic. In order to defeat them you must attack them on the back. 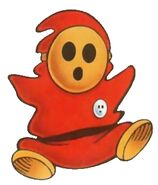 A Shy Guy from Super Mario RPG: Legend of the Seven Stars 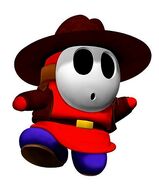 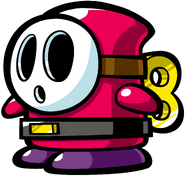 A Mini Shy Guy from Mario vs. Donkey Kong 2: March of the Minis.

The different types of Shy Guys from Mario Kart 8. 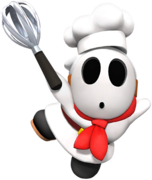 Retrieved from "https://mario.fandom.com/wiki/Shy_Guy?oldid=272069"
Community content is available under CC-BY-SA unless otherwise noted.