Tetsuya Takahashi
Shulk is a playable character in the Super Smash Bros. series. He is from the Xenoblade series and is the main protagonist of the first game, Xenoblade Chronicles.

Shulk is introduced as an intelligent and socially clumsy youth. He spends most of his time in Colony 9's weapons development lab, making weapons for himself and others. His main fascination is with the legendary Monado, the only weapon known to damage Mechon, but only usable by the injured hero Dunban; Shulk spends day and night researching it, trying to discover its secrets. When the Mechon attacks Colony 9, Dunban cannot continue to wield the sword, so Shulk is forced to take it - and to everyone's surprise, not only does he have control of it, but he finds that it gives him occasional visions of the future. Spurred to take revenge on the Mechon for their attack, Shulk sets out on a journey across the Bionis to find his enemy Metal Face and put him to justice.

Shulk appears as a playable character in Super Smash Bros. for Nintendo 3DS and Wii U, being officially confirmed during a Nintendo 3DS Direct on August 29th, 2014.

Almost all of Shulk's attacks involves him swinging his weapon the Monado, which has a beam of light that extends from the center of the blade and gives his attacks added range. Shulk can also use the Monado's main ability, Monado Arts, to alter his abilities, giving him specific advantages and disadvantages. Additionally, Shulk has one of the most effective counterattacks in the game with Vision, which has a long counter window when used fresh along with high range and power. 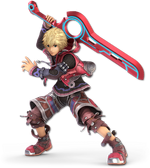 In Classic Mode, his opponents represent his Monado Arts in the cycling order from Super Smash Bros. 4. The penultimate battle against Mega Man represents the Monado Machine from Xenoblade Chronicles. Like most characters, his final battle is against Master Hand and Crazy Hand will appear if it is above intensity 7.0.