Shroobs are evil, purple, Toad-like aliens found all over the game Mario & Luigi: Partners in Time. They are the most common variation of Shroobs in the game. They conquered the Mushroom Kingdom of the past. Their leader is the Elder Princess Shroob and the second in command is Princess Shroob. Their home planet is shaped like a purple mushroom, known as the Shroob Planet. "A long time ago, way far out in space" looking for a planet to conquer while they were on their home planet. All bosses (with the exception of Bowser) have something to do with or are Shroob creatures/Shroobs. The Shroob army is lead by a Shroob Commander their invasion of the Mushroom Kingdom.

They possess very advanced technology, such as ray guns and a massive fleet of flying saucers. The saucers are capable of shooting energy bolts that turn people into Shroob Mushrooms, as well as causing devastating damage to houses and buildings. The Shroob military is very complex in their processes. They come in different colors and have different attacks. Unlike the Koopa Troops, the Shroobs have everything laid out in advance so that they could both protect vital operations and invade enemy regions at the same time, suggesting they are very intelligent. For some reason, the Shroobs are only able to speak their own language, which is causing some of the people such as Bowser to not truly understand what they mean.

The Shroobs are the main enemies in the game. They got tired of living on their planet and wanted a new home, so they set off a full invasion of the Mushroom Kingdom to make it their own. They first started their invasion by destroying Toad Town and the Hollijolli Village and capturing many Toads. These Toads were taken to Toadwood Forest, where their vim was drained, and was used as fuel for the Shroob's spaceships. Soon after, they created a gigantic Yoshi named Yoob who attacked Yoshi's Island. It would eat all the Yoshis he could find. The Shroobs were also present in the Gritzy Desert and the Thwomp Volcano. Shroobs also come in many different forms including divers, Shroobs on fire, guards, and even robots.

At the very end of the game the four Mario bros. and Peach find the Shroobs' weakness, baby tears. The Professor E. Gadd alters the chemical makeup of his water pump's water to be the same as the babies' tears. The machine spews water all over the Mushroom Kingdom of the past, ridding it of every trace of the Shroobs.

The passcode to the preservation chamber is listed below.

Before Fawful's show, a Shroob can be found sitting in one of the seats.

A picture of a Shroob can be seen in Kylie Koopa's office. Shroobs sprites are also visible in the game's codes but were removed from the main game for unknown reasons. 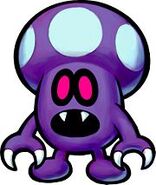 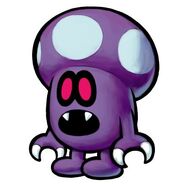 Princess Shroob and the Shroobs