Merlon (for most games)

Shamans are characters that appear in the Mario series.

Shamans resemble wizards wearing coats that completely cover their body. Because of this, only their eyes are seen.

Shamans actually appears as both characters and enemies in this game. In battle, the Shaman's Psychopath thought is "I'm losing this fight" and they mainly attack with spells. Shamans can be seen as shopkeepers at the Sea and are fought at Nimbus Land and Bowser's Keep. Due to their high magical defense, the Shamans are very weak to physical attacks so Mario's Jump moves are greatly effective against them. 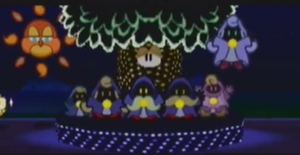 In this video game series, the Shamans appears as allies for Mario. There are many different Shamans that appear in this series but one of the most notable ones is Merlon who has far more appearances than the others (except for also Merlee). The Shamans can do numerous of things such as predicting the next path, finding the location of Star Pieces, and helping Mario during a point of a battle. The Shamans appear in every Paper Mario game except for Paper Mario: Sticker Star.