SNES Battle Course 4 is the one of the four Battle Stages in Super Mario Kart. Its theme is much the same as that of the Mario Circuit courses in this game.

This course reappears in Mario Kart Wii as a retro Battle Stage. Everything in the Wii version is the same, just that it has been graphically updated. The music and background are the same. 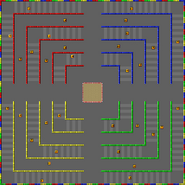 Map of Battle Course 4 in Super Mario Kart.
Add a photo to this gallery

Retrieved from "https://mario.fandom.com/wiki/SNES_Battle_Course_4?oldid=293671"
Community content is available under CC-BY-SA unless otherwise noted.