Riverside Park is the third course in Mushroom Cup of Mario Kart: Super Circuit. It takes place in a forest near a river. Racers drive on a dirt road which crosses over the river a couple of times. After the first turn, players can find the speed bump going over the river. There is also a bridge on top of the river which racers also cross. There are also two U-turns in this area.

There is also a shortcut on which can be found after the player jumps over the river. Next, they must turn 100 degrees to the right and follow a narrow pathway, leading the player to a shortcut.

Riverside Park on the selection screen. 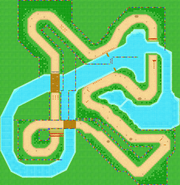