Dinosaur
Reznor ("Buibui", spelled ブイブイ in Japanese and 부이부이 in Korean) is a gray-colored, fire-breathing triceratops that appears as a fortress boss in the Super Mario series. It also appears in Super Mario Adventures and the Japanese manga, Super Mario-Kun. Interestingly, they always battle as a quartet (except for World 1-Tower in New Super Mario Bros. 2) and can be found standing on top of platforms connected to a giant wooden wheel. The platforms are similar (in terms of the concept) to the rotating magenta platforms first found in World 1-1: Make Eggs, Throw Eggs of Yoshi's Island for the SNES and Game Boy Advance.

Reznor made its debut as the boss of Vanilla Fortress in Super Mario World. Additionally, this fortress is the only level in the entire Mario series where Mario or Luigi have to swim through the entire level before reaching the boss.

Their greatest strength lies in their number, while their biggest weakness lies in the fact that they are standing fixed onto their own platforms. Mario or Luigi need to hit the platform only once from underneath to knock a Reznor into the lava pit. Alternatively, the hero can shoot several fire balls directly to knock it down. Once two of them fall into the lava pit, things begin to change. The remaining two Reznor jump from platform to platform and spit out more fireballs during the process. The floor underneath starts to quickly break apart, and the hero's best strategy is to jump onto an empty platform. He can jump from platform to platform and use either strategy to knock the remaining Reznor down.

New Super Mario Bros. 2 introduced several changes. Among them were: 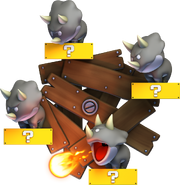 A group of Reznor. 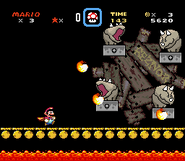