In the game, Rambi is the first Animal Buddies again that Diddy and Dixie Kong find throughout the game. He retains all of his abilities from the original Donkey Kong Country, but now has a new move calling the Supercharge Attack. This attack has Rambi charge up. Then after his charge up, Rambi runs at high speeds to defeat many enemies at once. He can also break open sensitive barriers more easy to enter Bonus Levels.

Rambi's fourth appearance is in Donkey Kong Land 2 itself. Here, Rambi has all his abilities which all return from Donkey Kong Country 2 does have, with the exception of the Supercharge Attack.

In the game, Rambi's residence is at Jungle Japes and Hideout Helm. Rambi can only be played as if Donkey hops onto an Animal Crate with Rambi's face on it. 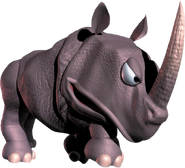 Rambi from Donkey Kong Country.
Add a photo to this gallery

Retrieved from "https://mario.fandom.com/wiki/Rambi_the_Rhinoceros?oldid=91458"
Community content is available under CC-BY-SA unless otherwise noted.