Its primary features are its colorful surface that appear to be made of reflective glass, its uplifting or cheerful music, and how it is is usually the longest (and sometimes the hardest) course (with the exceptions of Super Mario Kart and Mario Kart: Double Dash!!). 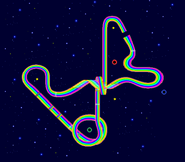 The track icon in Mario Kart 8.

Rainbow Road as it appears in Paper Mario: Color Splash.
Add a photo to this gallery
Retrieved from "https://mario.fandom.com/wiki/Rainbow_Road?oldid=274545"
Community content is available under CC-BY-SA unless otherwise noted.